Foreign minister to Armenia and Azerbaijan: escalation benefits neither side 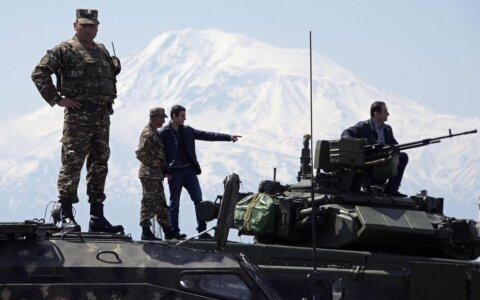 Lithuanian Foreign Minister Linas Linkevicius on Friday spoke by phone with his Armenian and Azerbaijani counterparts amid continuing clashes on the border between the two South Caucasus countries.

"The renewed armed conflict between the two Eastern Partnership countries poses a serious threat to security in the region," Linkevicius said in a press release.

"Neither side needs confrontation. What is the most important now is to bring the situation under control decisively, make a strategic pause, cease fire and refrain from any move that could lead to a further escalation," he said.

The Lithuanian minister called on the countries to make full use of available channels of bilateral communication and underlined the need for a stronger involvement by the OSCE Minsk Group, according to the ministry.

Linkevicius also discussed the situation on the Armenian-Azerbaijani border during his phone conversation with Turkey's foreign minister.

Foreign minister to Armenia and Azerbaijan: escalation benefits neither side