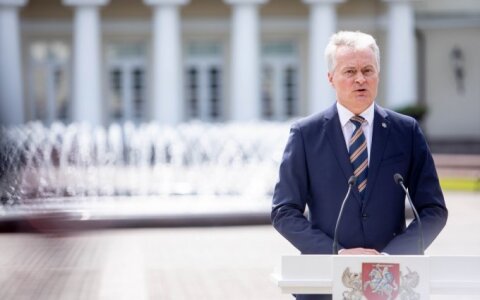 President Gitanas Nausėda will attend the European Council summit in Brussels on July 17. EU leaders will meet physically for the first time after the outbreak of the pandemic.

The meeting will focus on the multiannual financial framework and the European recovery fund to help EU member states to regain their economic and social stance in the aftermath of the COVID-19 created crisis.

“Unfortunately, we must admit that these attempts are designed to once again divide the world into spheres of influence, provide legal cover for Russia’s aggressive actions in its neighborhood and beyond, and to divide the Western community. We believe that they are directed against the sovereignty and independence of neighboring states,” the President said before leaving for Brussels.

The President will also inform European leaders about plans announced by Belarus and Rosatom to launch the Ostrovets nuclear power plant without regard to the international nuclear safety and environmental requirements, in violation of international conventions and without implementing stress tests recommendations.

Traditional coordination meetings will be held by the leaders of the Baltic and Nordic countries ahead of the European Council to review positions on the new proposal for the EU budget and to exchange opinions about the next multiannual financial framework and the European recovery package.

The President noted that even though the proposal presented by the President of the European Council had been improved compared to the previous one, issues of critical importance to Lithuania, including cohesion policy funds, convergence of direct payments to farmers with the EU average, the EU’s contractual obligations in respect of the Kaliningrad special transit programme, as well as financing intended for the closure of the Ignalina nuclear power plant, have not been yet resolved.