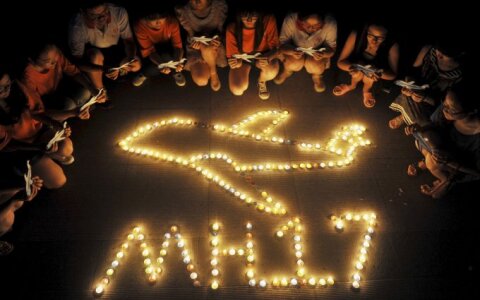 Lithuania is calling on Russia to accept responsibility for the downing of Malaysia Airlines' flight MH17 over eastern Ukraine in 2014, the Foreign Ministry said on Friday, the sixth-anniversary of the disaster that claimed 298 lives.

Lithuania expresses its solidarity with the victims' relatives and supports the Dutch government's decision to bring Russia before the European Court of Human Rights for its role in the downing of MH17, and the trial of four suspects that opened in the Netherlands this year, the ministry said in a statement.

"Those responsible must be brought to justice," it said.

The statement calls on Russia "to finally accept the findings of the Joint Investigation Team about its role in the downing of MH17 and to cooperate unconditionally with the JIT and the Netherlands' court".

MH17 was shot down by a Russian-made missile over eastern Ukraine en route from Amsterdam to Kuala Lumpur, killing all 298 people on board, including 196 from the Netherlands.

Dutch officials last year decided to bring four people – three Russians and a Ukrainian – to trial in absentia over the downing of the flight.