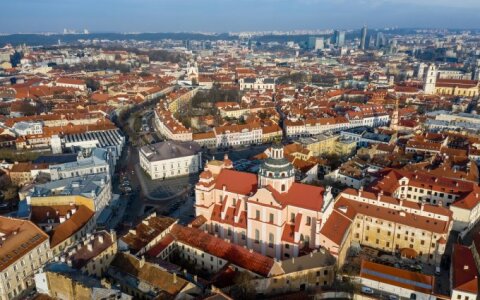 On 7 July, a new order for arranging traffic in Vilnius Old Town took effect – visitors and residents of the Old Town will continue to be able to access their homes, workplaces and sites of attraction, but will not be able to cross the Old Town. What should we know in the face of the change?

“The key thing is not to rush, driving at the speed applicable in residential areas (20 km / h) to be able to observe the road signs. And if it turned out that you made a mistake and entered the wrong entrance, keep calm, leave the zone and go to the right one. Or simply leave your car in the parking lot and walk the remaining distance on foot from one zone to another, admiring the Old Town as you walk,” the Deputy Mayor Vytautas Mitalas advised.

He recommended planning a route in advance, having analysed the schemes available both online (www.senamiestis2030.lt) and at the entrances to the Old Town, and choosing the most convenient place to enter and stop.

Examples of foreign countries have demonstrated that the majority will feel dissatisfied with the need to change their habits in the first three months, but later, having gotten used to the innovation and reduced traffic intensity, everyone will start feeling the benefits of a quieter, cleaner city and safer, more appealing leisure time at the heart of the city. One of the best examples of such a system is Stockholm, where you have to pay to cross the city center and make a big arc to get to the right place. This is how people are encouraged to walk, to cycle or use public transport and cross the old town without polluting the environment.

The decision to introduce loop traffic regulation was made in pursuit of reducing transit traffic. Currently, transit traffic at the heart of Vilnius makes up 40%, and it is up to 70% in the morning. Car traffic in this part of the city increases pollution and noise rates, reduces the safety of road users, which has a negative impact on both the condition of historic buildings and the quality of life or leisure. Therefore, a decision was made to introduce loop traffic and thus eliminate the possibility for people using its streets to shorten their routes.

What changed as of 7 July?

Having started a new stage of traffic organization in the Old Town on 7 July, traffic will be arranged here in four loops that will cover the entire historic city centre. The main entrances will be in Trakų, Islandijos, Subačiaus and Latako Streets, and the exits – in Visų Šventųjų, Klaipėda, Rūdininkų and Universiteto Streets. Each loop will have 1-2 exits.

In order to make it easier for drivers to remember the routes, the Old Town has been divided into four coloured zones according to the loops: brown (Trakų St. zone), orange (Islandijos St. zone), purple (Subačiaus St. zone) and blue (Latako St. zone).

What does “loop traffic” mean?

Moving in loop traffic means that having entered the Old Town on one side, exiting it on that same part of the Old Town only shall be possible, eliminating a possibility to cross it. The Old Town area will also be accessible from smaller streets, but all of them will also be a part of one of the four loops.

Will there be any signs guiding through traffic in loops?

Traffic in each loop will be one-way only, regulated using prohibitory traffic signs and barriers. The most important thing is to observe the signs and not to exceed the advisory speed limit.

How do I know which entrance is best for me?

Finding the right entrance will be easy – all you will have to do is to take a look at the map in advance to see what color zone your destination is in, and you will know which street to take to come to the Old Town. Navigation apps, such as Waze or Google Maps, can also come in handy in helping to get used to the changed traffic.

What are the benefits of loop traffic for residents and businesses in the Old Town?

Residents of the Old Town will continue to be able to access their homes, but the route which they use to enter and exit may change. The introduction of loop traffic aims to improve the quality of life of residents of the Old Town – they will be able to enjoy less car traffic, noise and cleaner air.
These changes will provide new opportunities for business developers. Fewer cars mean more pedestrians, cyclists and customers. In order to make it easier for businesses to adapt to the change, times will be planned for conveniently bringing and unloading goods on the most favourable route.

Will parking permits of residents of the Old Town change?

Residents of the Old Town will be informed about the changed traffic organization order in person sending them letters, SMS and distributing flyers in the city. The existing residence permits shall be valid throughout the entire connected territory, so residents will not have to take any specific action.

An existing permit can be extended or a new one can quickly and conveniently be purchased electronically on the website www.parking.lt. This can also be done at one of the Customer Service Centres located at Gedimino pr. 9A (Vincas Kudirkos Square) and Geležinkelio g. 16 (at the central building of the Vilnius Railway Station).

What rules will taxis and private hire drivers be subject to?

Taxis and private hire drivers will be able to pick up and drop off their customers according to loop traffic rules only. For the convenience of customers and drivers, the plan is to install customer pick-up and drop-off points at the centre of the Old Town in the future.

Will the organization of public transport change?

The public transport system will not change at this stage. Residents and guests of the capital will continue to be able to conveniently travel on bus No 89 and other regular bus routes. A new public transport stop is being set up next to the Town Hall Square for bus No 89 going to the Railway Station. When coming from the Railway Station, the bus will stop at the usual Town Hall stop.

There will also be minimal changes in the movement of buses near the Town Hall Square – when going towards Didžioji Street, they will move in an arc smaller than before.

As much as possible, public transport vehicles going to the Old Town will be more environmentally friendly adapted for all groups of the society.

How will loop traffic affect cycling and scooter traffic?

When it comes to cyclists and scooter riders, since now, they will be able to move in one-way streets of the Old Town with and without installed bicycle lanes both with and against car traffic. Klaipėdos, Subačiaus or Trakų streets are among such streets. Up until now, bicycle traffic was arranged here in the direction of car traffic only, but now going in the opposite direction is also allowed. There are no bicycle lanes installed in these streets, thus the recommendation is to stay on the right side of the road to be able to safely pass cars. Cyclists shall move on streets with installed lanes, such as Rūdninkų, Didžioji, Dominikonų or Universiteto Streets, with car traffic, and use the bicycle lane to move against car traffic. In two-way streets, or Vokiečių Street in particular, cyclists and scooter riders will move with car traffic as before.

We ask drivers to be careful, to refrain from passing cyclists and to drive at a safe speed of 20 km per hour.

Sidewalks of the Old Town are primarily intended for pedestrians having removed bicycle lanes from them. This means that the recommendation is to ride a bike or a scooter on the street, but sidewalks can also be used therefor, bearing in mind that pedestrians have a priority there. According to the Road Traffic Rules, when moving with pedestrians, driving at a speed close to walking is mandatory.

What are the fines planned for those, who do not abide by loop traffic rules?

They shall be the same as for anyone who does not follow road traffic rules. The new traffic order will be monitored with the help of city surveillance cameras, and the captured violations will be handed over to the Lithuanian Road Police Service. Later, a video surveillance system with license plate recognition will be tested, which will automatically capture cars entering different zones. Eventually, smart lifting and other barriers that recognize license plate numbers will replace the existing granite poles.