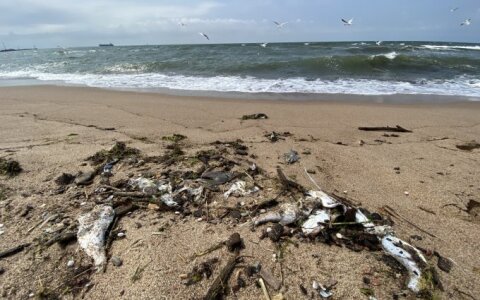 On 3 July, the Ministry of Foreign Affairs of Lithuania handed over a verbal note to the Embassy of the Russian Federation in Vilnius in response to information that had appeared in the public domain regarding serious environmental violations on the D-6 offshore platform on the continental shelf of the Baltic Sea.

The note expresses deep concerns over the environmental damages that have been identified by the Russian Federal Service for Supervision of Natural Resources (Rosprirodnadzor) on the D-6 oil field. In addition, the Foreign Ministry requests for more detailed information and an explanation about the investigation carried out by Rosprirodnadzor, as well as possible environmental incidents on the offshore platform that could have damaged the ecosystems of the Baltic Sea and its coastal areas.

Built and launched in 2004, the Kravtsovskoye (D-6) oil field is located in the Russian sector of the Baltic Sea, only 5 km away from the Lithuanian-Russian state border and 22.5 km away from a site on the UNESCO’s World Heritage List – the Curonian Spit. The issue of proper maintenance of the offshore platform is of particular importance to Lithuania due to environmental impacts and damage that could be the result of an ecological accident caused by improper operation.