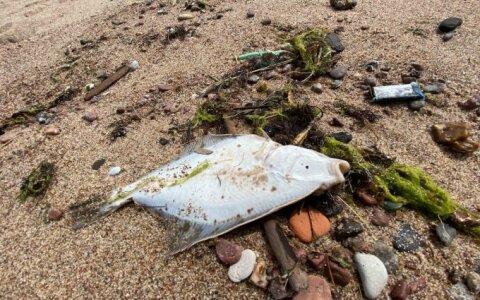 The die-off of fish and other aquatic organisms in the River Nemunas near Grodno in Belarus was triggered by natural and climatic causes, Belarus Ministry of Natural Resources and Environmental Protection said in a response to the note earlier issued by Lithuania.

“Fish kill was triggered by natural and climatic causes, including high temperature, heavy rains and lightning discharges. This might have led to a sudden fall in oxygen saturation in water,” the document seen by BNS said.

According to the Belarus ministry, the testing of water samples taken in the River Nemunas near the border with Lithuania had shown the oxygen saturation of 7.05 mg/L, which was slightly above the normal value of 6 mg/L.

The document signed by Deputy Minister Alexander Korbut said that no other pollutants – either pesticides or other contaminants – had been detected in the samples taken from the river.

Belarus also claimed that it had taken measures to address this situation, which was now getting stable.

The rapid reply to Lithuania’s note was surprising, Deputy Environment Minister Justina Grigaraviciene told BNS adding that this probably meant that the Belarusians were concerned with the issue of fish population in the River Nemunas.

“It’s a nice surprise that the Belarusians ... sent a reply within a couple of weeks, this does not happen often…,” the official said.

She admitted that the fish kill might have been triggered by natural causes.

Experts from Lithuania's Environmental Protection Agency took water samples from the River Nemunas near the southern cities of Alytus and Druskininkai in mid-June in response to reports about the die-off of fish and aquatic organisms in the river near Grodno in Belarus.

Tests then showed a slight decline in the level of oxygen and the water temperature of 20 to 21 degrees, which, according to the agency, could have led to a decrease in oxygen saturation.

The subsequent tests showed no pollution in the river.

However, Lithuania in mid-June sent a note to Belarus officially asking the neighboring country if it had recorded increased pollution in the River Nemunas.