Parliament speaker to run for Seimas with Liberal Movement 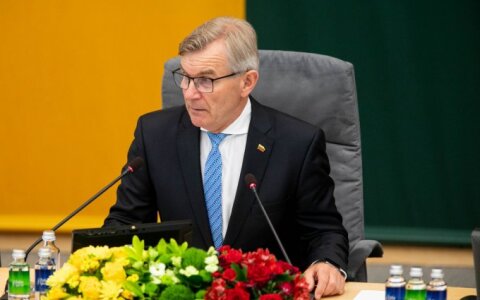 Speaker of the Lithuanian Seimas Viktoras Pranckietis has announced his decision to represent the opposition Liberal Movement during the upcoming general election.

"I received an invitation to run for Seimas with the Liberal Movement of the Republic of Lithuania. I want to represent freedom and create possibilities. Therefore, I am telling them today that I agree," Pranckietis posted on Facebook on Tuesday.

"As we had to mark the March 11th under certain restrictions, in my speech I wanted to underline what our freedom looks like. I said then in Lithuania "we sincerely cherish different world outlooks and opinions. Every word uttered here is truly free and attempts to ignore democracy are met with a strong civic conscience," Pranckietis said.

The speaker said that this is the way he sees Lithuania, adding that "as people, we are the most successful when we have the freedom to be ourselves".

Parliament speaker to run for Seimas with Liberal Movement