Lithuania protests attempt by Russia to rehabilitate the Molotov-Ribbentrop pact 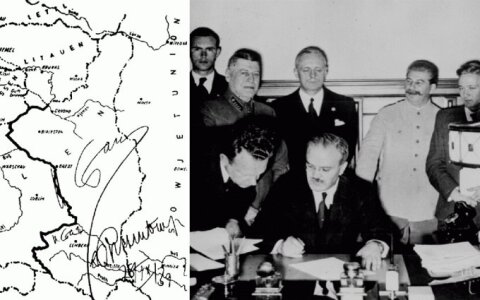 On June 18 a representative of the Embassy of the Russian Federation was summoned to the Ministry of Foreign Affairs of the Republic of Lithuania to express profound concern about the recent legislative initiative of State Duma deputy A. Zhuravlev to revoke USSR Supreme Council Resolution of 24 December 1989 condemning of the Molotov-Ribbentrop pact and its secret protocols, which divided Eastern Europe into German and Soviet spheres of influences and paved the way to invading Poland in 1939 and led to the Soviet occupation of the Baltic states in 1940, Lithuanian Ministry of Foreign Affairs informs.

Deputy Foreign Minister Dalius Čekuolis pointed out that the attempt to rehabilitate the two dictators was repeatedly condemned not only by the international community, but also by Russia itself. He also expressed hope that the Russian State Duma would have enough wisdom to reject a project that would bring today's Russia back to its totalitarian past.

Lithuania protests attempt by Russia to rehabilitate the Molotov-Ribbentrop pact