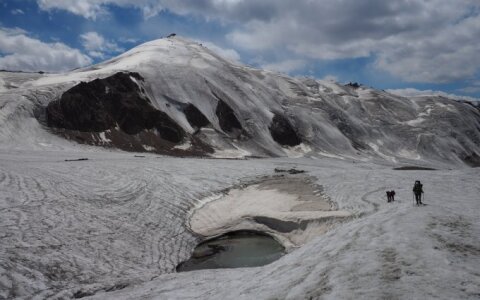 High in the Tian Shan mountains of Kyrgyzstan, archaeologists from Vilnius University discovered the strongest evidence yet for early and intensive farming of grain crops initially domesticated in the Fertile Crescent of southwest Asia. This research illuminates how the earliest food globalization processes unfolded during a time when the web of organized trade routes, known as the Silk Road, was still thousands of years away.

"It has long been assumed that only mobile herders could have tolerated the environmental extremes of Central Asia's mountains, which has led to misleading ideas that Central Asia was a domain of 'nomads'," said Giedre Motuzaite Matuzeviciute, associate professor at Vilnius University and lead author of the study published in PLOS ONE.

The research team in collaboration with Turkish Manas University in Bishkek recovered an astonishing assemblage of thousands of wheat and barley seeds from the Chap II site in central Kyrgyzstan, located at 2000 meters above sea level. Radiocarbon dating of the seeds provides a firm chronology for this agriculture practice at 2500 BC. Perhaps most importantly, the team found plant remains that are removed during processing, known as chaff, which demonstrates that the crops were grown locally.

Related articles
Lithuanian climbers name Tian Shan peaks after Basanavičius, Vidugiris
Colombian student in Vilnius: once you go to other countries, you open a door that may be difficult to close

"Previously, the first dispersals of domesticated plants through Central Asia were known from just a handful of seeds without evidence for local production, which suggested that the foods were traded through as commodities. Our research clearly shows that people were heavily farming the high mountain valleys of Central Asia and establishing widespread interaction networks across the region", said Taylor Hermes, second author of the study and affiliated researcher at Vilnius University.

During the early Bronze Age about 5000 years ago, wheat and barley from Southwest Asia and millets from East Asia crossed paths in the mountain foothills of Central Asia. However, the precise nature of these crop dispersals has eluded archaeologists due to sparse evidence for the actual plant remains. The abundant assemblage of wheat and barley recovered at Chap II shows that local communities had permanently occupied the harsh mountain environments of Central Asia at least 4500 years ago.

“The macrobotanical remains from Chap II are extremely important, as they fill in a massive gap for understanding how early cultural connections formed an impressive continental crossroads through the mountains of Central Asia,” said archaeologist Giedre Motuzaite Matuzeviciute, who is PI of the "Margins or Nodes" project funded by European Social Fund.

Diagnostic morphology of wheat and barley remains from Chap II reveals two types of free-threshing wheats, hulled and naked barleys and, possibly, glume wheats. If confirmed by future research, the glume wheats from Chap II would represent this crop’s eastern-most distribution. “The cultivated cereals from Chap II exhibit a wide range of grain morphotypes that were well adapted to the montane landscapes of the Tian Shan”, says Basira Mir Mahamat, a Kyrgyz student employed by the project.

"It was interesting that we did not find Chinese millets in the assemblage, which perhaps shows that interaction networks in the Tian Shan during the early Bronze Age were more oriented towards societies in regions adjacent to southwest Asia or that millets, unlike the varieties of wheat and barley at Chap II, were not yet adapted to high elevations," said Dr. Hermes.

The team also recovered wild plant taxa such as those in the Carex genus (sedges) which are commonly found in wetland ecosystems and provided the team with hints that the spread of farming into the mountains of Central Asia may have gone hand in hand with irrigation technologies.

Kubatbek Tabaldiev, who is co-director of the Chap II excavations, said, "We are seriously rethinking our biases and future research designs in the Tian Shan now that we understand that the first people to permanently occupy these mountains were intensive farmers, rather than anything that resembled nomads."