Man shoots one police officer dead injures another and flees 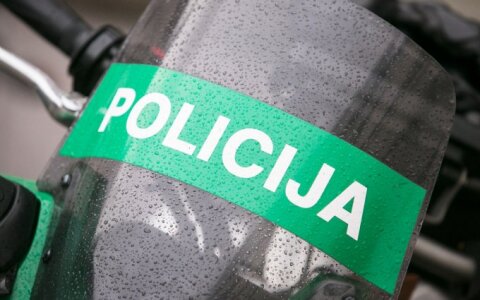 According to the Police Department, the police officers were checking information on a violent man and came under fire when they arrived at the man house.

It was later reported that the male officer, 40, was shot dead, and his female colleague was shot in the leg. Her life is out of danger.

"Police Commissioner General Renatas Pozela is expressing the deepest condolences to the family of the killed officer on behalf of the whole police community," the police said.

Related articles
Police to step up patrols in resorts, at cemeteries over long weekend
Police chief in Kaunas Zukauskas sacked

The suspect, born in 1968, is suspected to have fled to the nearby forest and might be armed, the police said. Police officers are looking for him

The police are urging people who might see the man not to get close to him and to inform the police as soon as possible.

A special plan is being implemented and high numbers of police officers and members of the Lithuanian Police Anti-Terrorist Operations Unit ARAS have been sent to Telsiai, Klaipeda and Siauliai Counties.

Interior Minister Rita Tamasuniene has left for the site of the incident, her advisor Bozena Zaborovska-Zdanovie told BNS.

Lithuania's police commissioner general is also on his way to the area.

The police officers went to the site of the incident after receiving a report about a burning house and the presence of an armed man.

Laura Valauskiene, spokeswoman for the Fire and Rescue Department, told BNS firefighters are now trying to extinguish the fire in the wooden house.

She confirmed that firefighters faced an armed person at the site.

Kornelijus Kryzius, elder of the Vieksniai area, which is part of the village of Birbiliskes, told BNS the suspect was not known in the area.