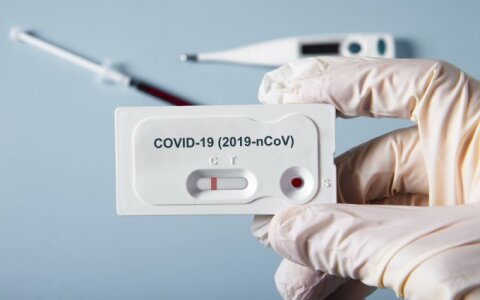 Rapid coronavirus tests that can detect antibodies in the blood show the best results 14-50 days after the first symptoms of COVID-19 appear or the infection is confirmed via a PCR test, and, therefore, are not suitable for diagnosing the virus, Vilnius University (VU) said on Friday.

To evaluate the reliability of rapid tests, researchers at VU and Santaros Klinikos, the university's hospital, have tested three separate producers' serological test kits that can detect the presence of IgM, IgG or IgA antibodies.

IgG class antibodies were detected in over 90 percent of blood samples taken during the period.

"This indicates that serological tests are not suitable for diagnosing an acute infection. They can be suitable for confirming a late or previous infection," VU said in a press release.

There are no uniform recommendations yet as to what purposes serological tests can be used for. Individual countries issue their own recommendations after assessing the reliability of these tests, it noted.

Rapid tests are simple and the result is visible to the naked eye in a matter of minutes, making them extremely convenient for mass testing. However, most rapid serological tests available in the market have not undergone proper validation procedures and their reliability must be assessed before they can be used, according to the press release.