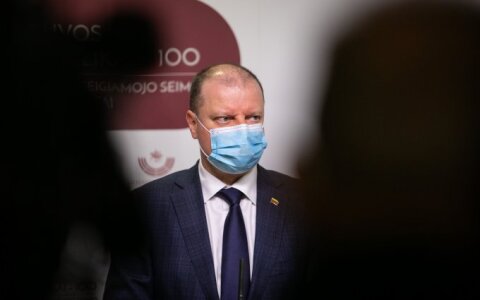 There's no need for a review of this year's budget, Lithuanian Prime Minister Saulius Skvernelis has reiterated once again, saying that there's no legal basis to do that.

He did not rule out, however, that it might be done later.

"We need a legal basis. (..) There's nothing to worry about. (…) All ongoing expenses are being accounted for. If we need to do an intervention into this year's budget, speaking of long-term commitments, everything will be done," the prime minister told lawmakers on Thursday in response to the reproach by the leader of the opposition conservative Homeland Union – Lithuanian Christian Democrats, over the procrastination to review the budget.

The prime minister says budget amendments will be put before the Seimas once necessary. "When we see the need to make those changes, they will be brought in," Skvernelis said.

Meanwhile, Vitas Vasiliauskas, board chairman of the central Bank of Lithuania, says the government's assistance to coronavirus-affected residents and businesses should "be transferred into the budget".

Members of the opposition are also urging the government to review this year's budget.