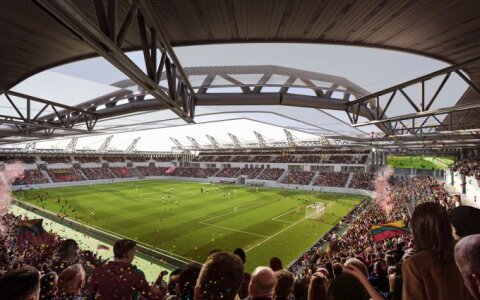 Lithuania's Public Procurement Service has ordered the Vilnius authorities to terminate a 156-million-euro contract on the construction and operation of a national stadium in the Lithuanian capital.

In its conclusion, a copy of which BNS has, the PPS states that the concession contract should have divided the state and Vilnius municipality's risks but after the project's funding model was changed, they were left with the whole risk, therefore, the contract the Vilnius authorities planned to sign with Axis Industries, part of the Icor group, cannot be deemed a concession contact.

"We looked into the last procedures, negotiations and their results and determined that the very essence of a concession, meaning that the private sector should take all or a major part of risk, has been lost. The negotiations with the sole concessionaire led to a situation where a major part of risk has been moved to the public sector. Meanwhile, a concessionaire's usual risks are gone, which does not meet the essence of a concession," Jovita Petkuviene, acting head of the PPS, told BNS.

"Of course, we will lodge a court appeal, but realizing the length of the process, we have no illusion. (…) We are already moving with increased energy towards drafting a new stadium plan as Vilnius will have it in any case," the mayor posted on Facebook.

Simasius told a pres conference later that the Vilnius authorities would consider building only a stadium, without other facilities, and would also consider other locations for it.

"We are weighing other options on how to probably have not a full multifunctional complex. As there were over a dozen of sports facilities there where around 2,000 people, especially children, could do sports. Perhaps we could have only the stadium in one or another place," Simasius said during the press conference.

Once the decision on building a stadium is made, a public procurement tender, not a concession tender, will be called and also a new project will be drafted, Simasius said.

Following several years of negotiations, the Vilnius authorities had planned to sign the contract with the tender's winner Axis Industries and the project's investor Baltcap in March. It has already been approved by the municipal council and the government.

The PPS, however, blocked the signing in March in response to prosecutors' request as they wanted to look into whether the increase in the concession value during the negotiations was founded and legitimate.

Attempts to build an international-standard stadium in Seskine have been made since 1987. Construction works were last started in 2008 but had to be halted as the funding was discontinued.