Veryga links coronavirus morbidity among medics with inability to use PPE 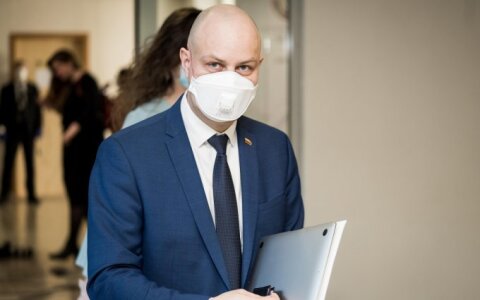 A high coronavirus morbidity rate among medics in Lithuania is probably linked to insufficient use or inability to properly use personal protection equipment (PPE), Lithuanian Health Minister Aurelijus Veryga says.

His comment came in response to the latest figures from the country's National Public Health Center, which showed that medics account for a fifth of all coronavirus cases in Lithuania.

"This figure is definitely raising concern. The key reason probably is the ability and knowing how to properly use of PPE. If we could say in the beginning that there was a shortage or lack of it, so now, when there's been brought plenty of it, those figures might probably be linked to either the failure to use it, improper use of it or its use not based on the protection level," Veryga told a press conference.

"And that spread is probably has to do with that. As I can repeat once again: there are medics who constantly come into contact with infected patients and do not get infected. Those medics work within infectious diseases units, and used to work there before ad did not use those hazmat suits they are using now, but they just knew how to work," the minister said.

Veryga links coronavirus morbidity among medics with inability to use PPE