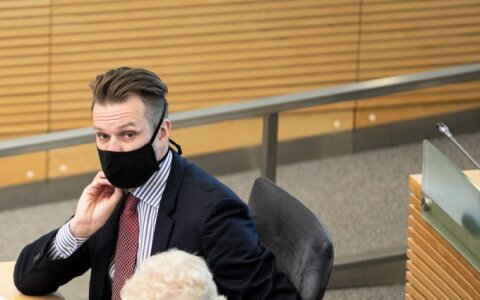 Lithuania's parliamentary opposition leader says President Gitanas Nauseda's proposals on labor tax cuts and one-off payments to families with children have to be discussed in tandem with a budget review.

"I mentioned during last week's meeting with the president that it was difficult to assess such a rain of gifts unless we see the budget as a whole," Gabrielius Landsbergis, the leader of the conservative Homeland Union–Lithuanian Christian Democrats, told BNS on Friday.

"We expect that the president will demand that his proposals be discussed along with a budget review," he added.

Nauseda earlier on Friday proposed temporary labor tax cuts and one-off payments to families with children to give a boost to the country's economy during the crisis.

The president tabled the additional 50-million-euro package after signing into law a bill on one-off payments of 200 euros to pensioners and some other social groups.

The parliamentary opposition has repeatedly called on the government to submit an updated state budget to the Seimas. The prime minister and the finance minister say, however, that there is no such need, at least for now.