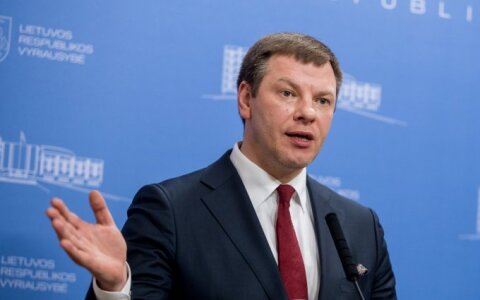 Lithuanian Finance Minister Vilius Sapoka has welcomed President Gitanas Nauseda's recent proposal on additional payouts to families with children, but is cautious about his proposal to cut the residential income tax rate from 20 to 15 percent.

"The residential income tax cut issue definitely needs in-depth and very cautious discussions. Calculations by analysts from the Finance Ministry show the benefit for the most vulnerable resident groups would be minimal, and it would mostly benefit not only those in employment but also the highest-earners," Sapoka told BNS on Friday.

The government and president's positions on child payouts and the reduction of the non-taxable income rate match, the minister said.

"Not only for the finances and the economy, but, first of all, it's important for people to see that the country's all government institutions are working together. It's good that the president is actively engaged in the discussion and proposes amendments to the government's plan. (…) I am glad we have backing for child payouts, as we have already discussed it in the government, and we have also proposed raising the non-taxable income rate. So our opinion really matches that of the president here," Sapoka said.

Earlier in the day, Lithuanian President Gitanas Nauseda proposed temporary labor tax cuts and one-off payments to families with children to stimulate the country's economy during the crisis.

The president presented the additional package worth 500 million euros after signing the Seimas-adopted law on one-off payments of 200 euros to pensioners and some other social groups.

Nauseda proposes reducing the residential income tax rate from 20 to 15 percent on workers' income of up to three average monthly salaries, or 4,000 euros before tax. The reduced rate would be in force from July until the end of this year.

Nauseda also suggests bring forward the planned increase in non-taxable income and increase it by 50 euros as early as this year.

The total value of these measures is estimated at around 500 million euros, the presidential office says.