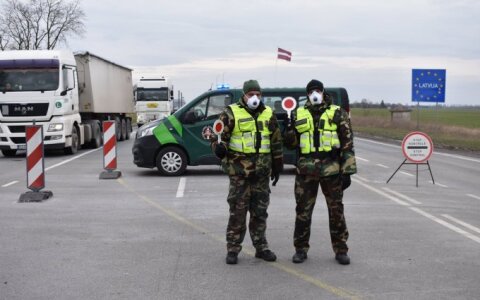 As the Baltic states have lifted the restrictions for their citizens to travel to other Baltic states, there are no queues on the Lithuanian-Latvian border yet, but they are likely to form over the upcoming weekend, Rustamas Liubajevas, chief of Lithuania's State Border Guard Service, warns.

"There are no queues on the Latvian border yet but we will continue monitoring the situation. We have agreed with our neighbors that, if needed, we will try to coordinate actions and divert vehicles and persons to various checkpoints. Queues are likely to form at our checkpoints towards the weekend," Liubajevas told a press conference on Friday.

To avoid that, he added, the heads of the Baltic border guard services have agreed to open the additional checkpoint, Kalviai-Meitene, on the Lithuanian-Latvian order, in addition to the three already opened.

69 citizens arrived to Lithuania from Latvia from midnight, when the restrictions were lifted, until 5 a.m., and 51 people left Lithuania, the SBGS chief said.

Baltic residents are able to travel to other Baltic states if they have not traveled outside Lithuania, Latvia or Estonia over the past 14 days. But the existing document checks in Lithuania will remain. There are no document checks on the Latvian-Estonian border as Latvia did not reintroduce its internal border control.

Lithuania's Interior Minister Rita Tamasuniene says that as the epidemiological coronavirus situation is improving, Lithuania might end border control with Latvia in the future.

"We will monitor the situation, make proposals, perhaps, thinking about the future, we might end control on the Latvian border at all," she said.

The minister said citizens are not required to state the purpose of their travel when travelling to Latvia and Estonia but they should no forget their passport or ID card, facemasks and also have information on the existing quarantine requirements in those countries.

The health of incoming and outgoing people is checked by specialists from the National Public Health Center.

Lithuania's Foreign Ministry says it’s the first example of such cooperation in the whole of the EU.

Poland and Finland might be included into the common movement zone in the future.

Poland extended its border control until June 12 but Lithuanian and Polish citizens can travel freely, if they travel for business, studies or work reasons, as of Monday.