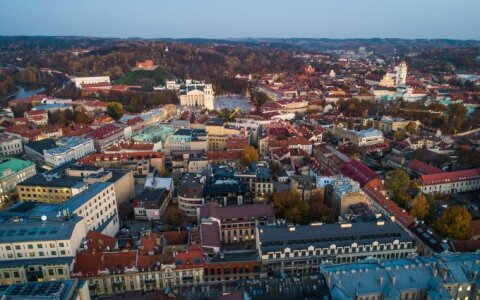 Vilnius continues taking advantage of the opportunities offered by quarantine: the idea of ​​freedom for outdoor cafes is followed by a new and an even stronger concept of freedom for the Old Town – freedom from car transit. Loop traffic to be introduced at the heart of the capital in July will allow getting rid of unnecessary transit traffic, and starting next week, four streets in the Old Town or their sections will be freed up for pedestrians.

All these solutions, which have also been made in many Western European cities, were provided for in the Sustainable Mobility Plan of Vilnius, but a declined car traffic intensity during the quarantine allowed implementing them a year earlier than planned.

“This means a cleaner and quieter immediate environment to residents of the Old Town, greater vitality especially needed during this crisis – to local businesses, and an even more unique Old Town – to all residents of Vilnius, which will lure them not only with its entertainment, but also with a possibility to simply take a walk. Cars cannot dominate the most sensitive and beautiful part of our city – Vilnius is choosing to be a city of the future now,” said Remigijus Šimašius, the Mayor of Vilnius.

Traffic in the Old Town arranged in four loops

As from July, the core of the Old Town of Vilnius will be divided into four one-way traffic zones. Each zone will have its own entrances and exits, but traffic between these zones will not be possible. In other words, the movement in the Old Town will take place in loops – having come from one side, drivers will also leave on the same side, no longer being able to cross the Old Town in transit. According to the data of research conducted by the City, so far, as much as 40 percent of traffic has been transit traffic during the peak hours in the Old Town, crossing the Old Town without even stopping there and adding no value thereto.

The four loops or zones around them will be named after the main entrances to them – Trakų, Islandijos, Subačiaus and Latako. Driving around the Town Hall of the city will no longer be possible either. Accessing it in three different loops shall be possible, but they will not intersect here; traffic flows will be decoupled. A new scheme of traffic in the Old Town is available on the website www.senamiestis2030.lt created specifically for explaining these changes.

“All changes require understanding and patience. We will help you to understand the new map of the Old Town, so I ask Vilnius residents to be patient – at first, you may be unable to find the right entrance or you will make a wrong turn, but we will not be able to even imagine the appeal of the Old Town without these changes after a while, just like now we cannot understand how smoking was once allowed in restaurants,” says the Mayor of Vilnius.

According to him, finding the right entrance will be easy – all you need is to take a look at the map, find the colour of the zone where your destination is, and you will know which street you have to take to enter the Old Town. The use of traffic apps, such as Waze or Google Maps, will also help to get used to the changed traffic.

4 streets freed up for pedestrians

A decision to introduce loop traffic this summer allows cutting off some streets of the Old Town from car traffic immediately. Starting next week, traffic will be closed every day in sections of the following streets: Savičiaus Street (between Augustijonų St. and Savičiaus St. 6, where so far, traffic was closed on weekends only), Stiklių Street (in the section from Stiklių St. 7A to Gaono St. 10), and in Gediminas Avenue (in the section between Vilnius St. and T. Vrublevskio St., with the possibility to deliver goods in the morning from 4:00 to 11:00 a.m.).

Traffic in the section of Vilniaus St. between Islandijos and Labdarių Streets will also change, closing access from Islandijos Street, with the major part of the street given away for pedestrians and outdoor cafes, allowing residents to enter from Labdarių Street. More detailed information on the reorganization of traffic in this street will be announced in a few days.

“We already have examples in Vilnius of how freeing up streets of the Old Town to pedestrians brings these streets back to life. The Old Town is much less impressive when explored through a car window – I have no doubt that we will see how beautiful it actually is in the nearest future, as soon as we switch from car wheels to shoes,” said Vytautas Mitalas, Deputy Mayor of Vilnius.

Public transport will also adapt to the changes

“Our data show that the use of public transport is growing again in Vilnius after a very long break -investments in its renovation are already paying off,” said V. Mitalas. “We want to make Vilnius cleaner, cosier, livelier and safer, and it is therefore necessary to rediscover travel by public transport, bicycling and walking.”

The closing of the said streets is planned in the warm season – till 1 October of this year, later assessing how these solutions can be applied each year.