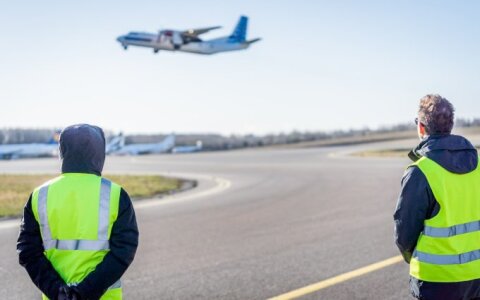 The Lithuanian government plans on Wednesday to relax the existing flight approval rules and lift the requirement to get the foreign and transport ministers' permission and only the Lithuanian Transport Safety Administration's permission would be needed, Transport Minister Jaroslav Narkevic says.

"The conditions will be further relaxed as we plan to lift the requirement to get the foreign minister's proposal and the transport minister's order to the Lithuanian Transport Safety Administration to allow one or another flight to take place. In other words, we will get back to the usual order when the Lithuanian Transport Safety Administration issues flight permits," Narkevic told journalists at the parliament on Tuesday.

According to the minister, the changes are planned to come into force as of May 15, although the date might change.

The transport minister also said the country's airports would likely post three-month loses of 70 million euros due to the quarantine, adding that they might get back to normal passengers flows only in 2023.

Related articles
Air Baltic puts off resumption of flights in Baltics
Skvernelis: Lithuania may resume first flights on May 10-15

"Based on our calculations, the airports and Oro Navigacija (Air Navigation, the air service provider in Lithuania) has the biggest losses and those losses, if we speak about a three-month period, will reach around 70 million euros. We will manage to get back to the 2019 passenger levels, which stood at around 5 million, only in 2023," Narkevic said.

"This year, we expect passenger flows to stand at 2.3 million, which is more than half down, and up to 3 million next year," the minister said.

Lithuania suspended flights due to the threat of the coronavirus. German airline Lufthansa is set to resume Vilnius-Frankfurt flights as of May 13.