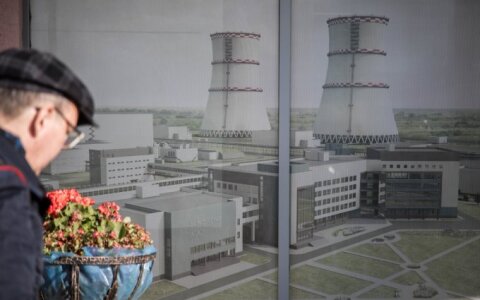 VILNIUS, May 07, BNS - Ukraine has promised not to purchase electricity from the Astravyets nuclear power plant under construction near Belarus' border with Lithuania, Energy Minister Zygimantas Vaiciunas said.

"Although there have been various statements earlier, Ukraine's message is clear now: it does not plan to buy and will not buy electricity from the nuclear power plant under construction in Astravyets either in the short or long term," said Vaiciunas, who discussed this issue with Ukraine's Acting Energy and Environment Minister Olga Buslavets.

According to the Lithuanian minister, this confirmation from the Ukrainian minister sends an important signal to the EU and the Baltic countries and Poland.

"Ukraine shows solidarity with Lithuania in its boycott of electricity from the Astravyets nuclear power plant", he said.

The Ukrainian parliament is debating a draft law on the country's integration into the European energy system. The bill calls for banning commercial electricity imports from non-EU or Energy Union members.

Lithuania says the Astravyets plant, which is located some 50 kilometers from Vilnius, fails to meet international safety and environmental standards, an allegation that Minsk denies.