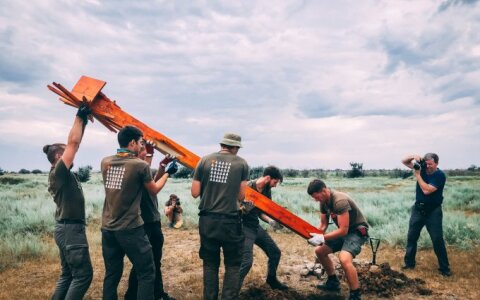 Mission Siberia, an expedition organized annually to tend to graves of Lithuanian deportees and political prisoners, has been cancelled this year due to the coronavirus pandemic, the organizers said on Tuesday.

Aiste Eidukaityte, the head of the project, cited uncertainty about when lockdown restrictions in Lithuania and other countries could be lifted as the main reason for cancelling this year's expedition.

"As the expedition requires a lot of preparation and we want to have all the information as early as possible, we decided that we couldn't go on the expedition this year," Eidukaityte told BNS.

"We'll start preparing for a 2021 expedition right away," she added.

Eidukaityte said the exact destination for this year's expedition had not been chosen yet.

Mission Siberia teams could not go to Siberia in 2018 and 2019 after being denied visas by the Russian embassy to Lithuania, but they travelled to Kazakhstan instead, the project's head said.

Related articles
Plans to commemorate Baltic Way by naming roads
American author writing on Holocaust: past serves as a warning how things can go between nations  (1)

"We always found a way out of the situation, but this won't work this time," she added.

Over 170 Lithuanian burial sites in Siberia and other former Soviet republics have been tended to since the launch of Mission Siberia expeditions back in 2006.

"We celebrate our 15th anniversary this year. For the first time in all those years, the expedition won't be leaving," Eidukaityte said.

Some 275,000 people from Lithuania were sent to forced-labor camps or deported during the Soviet occupation period.