PM and finance minister refuse to answer questions from opposition 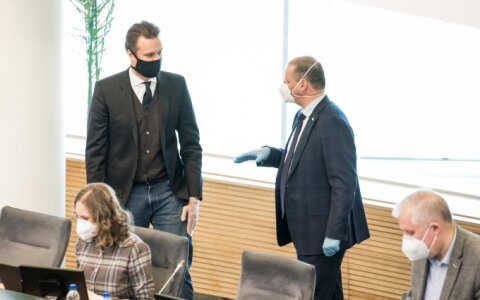 The Seimas held on Thursday an unscheduled plenary sitting at the opposition's initiative.

Viktoras Pranckietis, the speaker of the Seimas, read out letters from the government's office and the Finance Ministry informing the parliament that MPs have the right to submit only one question in writing.

Since more questions were received, they asked parliamentarians to choose the most important one.

The members of the Cabinet also informed the Seimas that the question and answer session in the parliament coincided with a meeting of the government's COVID-19 crisis coordination committee.

According to Gabrielius Landsbergis, the Seimas opposition leader, this is the first time that the prime minister or any other state official has refused to come to the parliament's sitting and answer questions.

The leader of the conservative Homeland Union- Lithuanian Christian Democrats described the situation as "shameful".

"These questions will have to be answered anyway. We'll invite them next time; we'll collect signatures again," he said.

The prime minister is setting a precedent by refusing to answer more than one written question, Landsbergis warned.

Skvernelis' spokesman, Tomas Berzinskas, told BNS that "the prime minister opts to do specific work rather than take part in political games".

"All the more so because members of the Seimas will be able to ask all their questions and receive answers during the government hour," he added.

The so-called "government hour" was held at the Seimas later on Thursday.

Some of the written questions to Skvernelis were about the government's decision to test members of the Cabinet and other high-ranking politicians for COVID-19 every week, about bonuses to the Health Ministry's employees, and a date for nominating a candidate for economy and innovation minister.

The opposition also asked the prime minister to give his "moral assessment" regarding the asphalt paving of the street leading to his house.

MPs from the ruling Lithuanian Farmers and Greens Union, the Social Democratic Labor Party and the Electoral Action of Poles in Lithuania–Christian Families Alliance are not taking part in Thursday’s sitting.

PM and finance minister refuse to answer questions from opposition