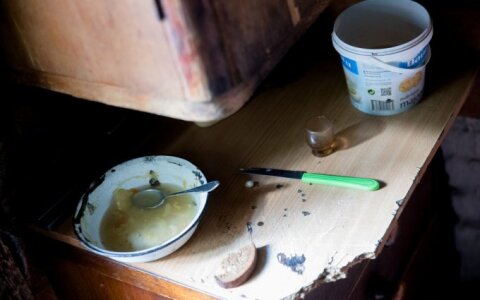 Children from social risk families and elderly people have become even more vulnerable during the existing quarantine in Lithuania, and nongovernmental organizations providing assistance to them start lacking funds and volunteers.

"We have even had such horrible calls when parents say: "Take my kids, I cannot do that anymore". You realize that they really don’t want to give their children away but have reached their limits," Rasa Zaidovaite of the NGO SOS Vaiku Kaimai Lietuvoje told BNS.

The organization provides social assistance to around 300 increased risk families in Lithuania. With the help of social workers, parents from such families are often undergoing treatment for psychiatric disorders and alcohol or drug addictions.

Work might have to be suspended because of coronavirus

The NGO Save the Children has faced two key problems, including a lack of donations and a growing need to provide assistance to fostered families, its head Rasa Dicpetriene says.

"We estimate that we might lose around 40 percent of donations over this year because of the coronavirus. It means that we have around 50 day centers attended by around 1,000 people behind the back of our organization. We are committed to help those centers financially and patronize them. If we don’t survive, then we will not be able to help those kids, and every kid has a family where there might be elderly people and sick kids," the Save the Children head told BNS.

In her words, a tenth support concert had been planned in March but had to be postponed, and the organization collects around 200,000 euros in donations during the concert every year. And as the majority of shops closed, out of almost 2,000 existing donation boxes, only those at food shops are now being filled. Only several hundred of them are used during the quarantine.

As educational establishments and day centers were closed, Save the Children started consulting the families of their children remotely and also providing essential food products, Dicpetriene said. If the quarantine is extended until the summer, Save the Children might have to close.

"We don’t have any financial reserve," Dicpetriene said.

The Order of Malta's assistance service in Lithuania provides regular assistance to around 2,600 elderly people and delivers food to their homes.

"After the quarantine was introduced, we had to review our services and the key challenge was how to deliver food safely. We have now split those people into two groups – those having vital and non-vital needs. If, let's say, we have elderly people who only receive hot food from us, so we will continue ensuring it for them," Dalia Kedaviciene, head of the service, told BNS.

"And we also deliver hot foods and packages including dry long-life products, once a week. We used to do that several times a week before but we are now restricting that number of visits, and volunteers wear face facemasks, gloves when they deliver and to have as little contact as possible," she said.

Private businesses are also contributing to the delivery of food to elderly people, Kedaviciene said.

Gintare Guzeviciute, secretary general at the Lithuanian Red Cross, says volunteers from the nongovernmental organization provide emotional assistance to elderly people and maintain the "human connection", but they had to start providing food as well during the quarantine.

"We call elderly people every other day and inquire how they are doing. But we have noticed that we can protect them from contracting the virus by only ensuring that they get goods and products delivered to their homes so that they don’t need to go to the store or pharmacy," Guzeviciute told BNS.

"We set a certain budget for every elderly person a week. A volunteer is told by an elderly person what they need the most, and we deliver a package, having those financial means," she added.

Volunteers delivered over one hundred such packages last week, the head of the Lithuanian Red Cross said.

Guzeviciute says the organization currently provides assistance to around 400 elderly people. In her words, people have already donated almost 30,000 euros for the purchase of essentials to such people.

The Lithuanian Red Cross is now looking for around 150 volunteers who could help around 800 elderly people in Vilnius, Kaunas and Klaipeda buy products for their money so that elderly people do not need to do that themselves during the existing quarantine.

Maisto Bankas (Food Bank) also had to adapt its operations after Lithuania was placed under quarantine. Just as before, part of food products nearing their expiry date are being collected from retail chains and distributed to around 600 nongovernmental organizations. But the other part of products people would come to collect themselves before the quarantine was put in place now has to be delivered.

"In Vilnius alone, we have delivered packaged to almost 1,000 people. In most cases, they are elderly people, sick people, poor people," Migle Petronyte of Maisto Bankas told BNS.

In her words, April will bring even more work.