Lithuania bans all passenger air and ferry travel from Saturday 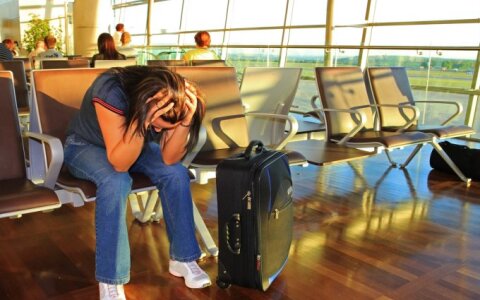 The Lithuanian government on Wednesday imposed a ban, effective from Saturday, on all passenger air and ferry travel, except for the ferry route between the German port of Kiel and Klaipeda.

"As of April 4, 2020, 00:00, it is forbidden to transport passengers and their cars to the Republic of Lithuania by passenger ships and ferries, with the exception of the Kiel-Klaipeda-Kiel ferry service or with the permission of the interior minister or his authorized representative," Health Minister Aurelijus Veryga said.

Passenger flights to and from Lithuanian airports will also be prohibited from Saturday unless authorized by the Lithuanian Transport Safety Administration, subject to approval from the ministries for transport and foreign affairs.

The new restrictions will not apply to the movement of goods, which means that commercial vehicles will be able to arrive in Lithuania by ferry and aircraft will be allowed to deliver cargoes.

As part of coronavirus quarantine measures imposed on March 16, Lithuania closed its borders, barring entry to everyone except returning citizens and leaving foreigners.

Foreigners are allowed to cross Lithuania's territory in transit until the end of the quarantine. People who have returned to Lithuania from abroad must self-isolate for 14 days.

According to the Foreign Ministry, around 3,000 Lithuanians have returned home on special repatriation flights and ferries since the start of the quarantine – about half of the citizens who registered with the country's diplomatic missions abroad.

Lithuania bans all passenger air and ferry travel from Saturday