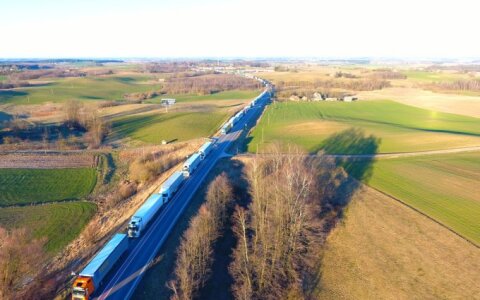 The Lithuanian central bank forecasts that the economy may contract between 3.4 and 20.8 percent this year, depending on how long the nationwide quarantine remains in place.

The Bank of Lithuania on Thursday upgraded its forecasts based on three economic development scenarios.

"In a U‑shaped scenario, which is the baseline one, we project an economic contraction of over 10 percent, at 11.4 percent," said Vitas Vasiliauskas, the central bank governor.

"If the impact is abrupt and the quarantine lasts two months (...) until mid-May, the rate of contraction would be between 3 and 4 percent," he said. "In case of a protracted U-shaped recession (a four-month quarantine period), it would be around 21 percent."

"The scenario presented on March 16 was really an optimistic one, and we are not speaking about it now. I would like to remind you that the we spoke about possible economic contraction of 1.2 percent for this year," Vasiliauskas said.

The Bank of Lithuanis says the coronavirus outbreak will hit Lithuania’s economy with its hardest punch in the second and third quarters of 2020. However, if the spread of the virus is properly contained and economic stabilization measures are put in place, economic growth could be back on track already in 2021.

Under the baseline scenario, Lithuania's GDP is expected to grow 9.7 percent in 2021.

Under the first U scenario, Lithuania's exports will drop 13.4 percent, as much as it did during the 2009 crisis, and should grow 15.1 percent next year.

Under the V form scenario, exports volumes would drop 4.7 percent this year.

Unemployment should rise to 9-16 percent, depending on the scenario, this year, and should stand at 6.9-9.8 percent next year. It stood at 6.3 percent last year.