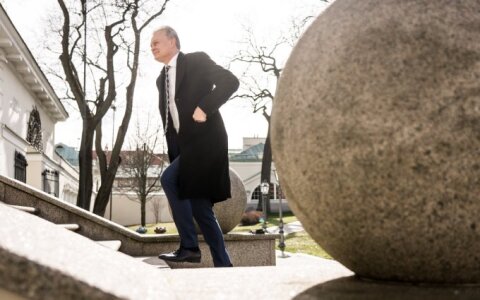 The state is ready to increase its debt to rescue the economy, Lithuanian President Gitanas Nauseda says, also adding that businessmen also need to be socially responsible towards their employees and partners.

The head of state believes the coronavirus crisis has removed some of businessmen's masks.

"Such complicated circumstances we are now facing help those masks to drop," Nauseda said in an interview with BNS.

There have been media reports since Lithuania was placed under quarantine that some big companies announced their decision to suspend orders and payments on the first day already and even suggested that their employees should take sick leave by lying to doctors about their contact with infected people.

Meanwhile quite a number of other businessmen started donating medical equipment and protection means to medics and also offered free services.

"Today, some businessmen write messages and letters about the way we can contribute to the public overcoming the coronavirus crisis as soon as possible, what we can produce, where can we transfer money to special funds that would fund all of this. And others demand the same rent payments from their tenants, demand that their employees lie and use the state's assistance even in the absence of the need," Nauseda said.

According to the Lithuanian president, some businessmen definitely have the possibility to use the reserves they have accumulated from their profit for the start of the crisis. And a 2.5 billion euro plan was endorsed earlier this week, aimed at helping businessman and preserving jobs. It also stipulates tax payment deferral and compensation of workers' pay.

Nauseda says Lithuania is ready to increase its debt to preserve jobs.

"The state is ready to go deep into debts to, first of all, help the business sector and, which is even more important, help people to preserve their jobs and income," the president said.

He also underlined that the European Commission decided to provide more flexibility regarding budget deficits to member states, and the European Central Bank increased money flows in circulation to ensure lending for small and medium enterprises.

"Today, we can no longer lie in that Procrustean bed stipulated by the Stability and Growth Pact, so now we have all assurances that states can move towards programs of increased borrowing, borrow more, increase public expenditure and create certain mechanisms to compensate for the inevitable drop in budget revenue, as we are entering a totally different stage of economic development," Nauseda said.

The Finance Ministry estimates that Lithuania's economy will shrink 1.3-2.8 percent this year due to the coronavirus crisis, on condition that the virus is contained in the first half of this year.