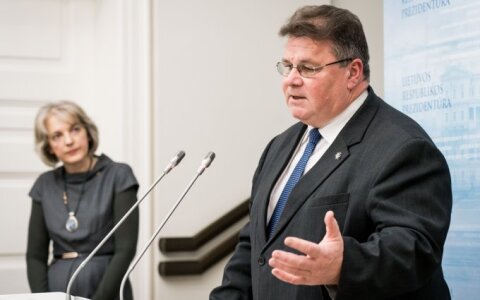 Russia continues to violate the Minsk Agreements, Lithuanian Minister of Foreign Affairs says in response to the recent flare-up of the situation in eastern Ukraine.

"They are testing their force again and look what the reaction will be. It comes alongside criticism of Ukraine that it fails to adhere to the Minsk Agreements, but, obviously, they themselves fail to do so," Linkevicius told journalists on Thursday.

"There must be a ceasefire. It’s not only disregarded, but also new weapons, banned under the Minsk Agreements, are used. And although they say that it's not them, but separatists, everyone is perfectly aware that these are forces they train, fund and support," the minister said.

"To tell the truth, with the participation of their military personnel, which has been proven many times. I believe what they are doing does not strengthen their position in the international arena. Everyone has been convinced once again that there's no sincerity to implement the Minsk Agreements," he said.

One Ukrainian soldier was killed during fierce battles in eastern Ukraine on Tuesday, and another four were injured. These were the biggest battles with pro-Russian separatists in several months. Separatists said they lost four fighters.

Ukrainian President Volodymyr Zelensky called this bloodshed "a cynical provocation" that undermined new efforts to resolve the conflict in the east of the country.

According to Linkevicius, it's not easy to introduce additional EU sanctions for Russia for its failure to comply with the Minsk Agreements.

"Believe me, it's not easy to generate additional sanctions, and that's not the worst scenario when we manage to maintain the existing one. Since there's a constant question as to whether they need to be extended. But such events provide us with more instruments," Linkevicius said.

"Some say the sanctions produce no result as the military process still continues. That's an argument of the opponents. We say, at least I usually say, that if the sanctions are not effective, let's lift them up and then will be effective as now they are not all-encompassing," he said.

Ukraine has been fighting against separatists in the eastern regions of Donetsk and Luhansk since 2014 when Moscow annexed Crimea.

Separatists are supported by Russia which is subject to tough Western sanctions for its role in this conflict.

Over 13,000 people have been killed since 2014, despite the Minsk Agreements signed in the Belarusian capital in 2015.