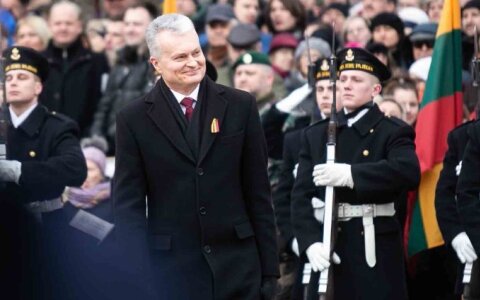 Lithuanian President Gitanas Nauseda awarded 34 Lithuanian and foreign nationals for their merits to Lithuania on Sunday when Lithuania marked its Independence Day.

The awardees also included ex-US Defense Secretary James Mattis, as well as the archeologists who found the remains of the participants of the 1863-1864 uprising.

"Thank you to those who brought into the daylight the remains of the participants of the 1863-1864 uprising and brought us back an important part of our rich history. Also thank you to our foreign guests who have a sincere interest in Lithuania and wish it prosperity and peace and continue building bridges among friendly nations," the Lithuanian president said at the start of the ceremony.

Ex-Pentagon chief Mattis was awarded a Cross of Officer of the Order for Merits to Lithuania for strategic defense cooperation between the US and Lithuania and consolidation of US and NATO commitments in Lithuania.

Also, archeologists Gytis Grizas, Arunas Kalejus ir Valdas Steponaitis of the Lithuanian National Museum received Crosses of the Knight of the Order of the Lithuanian Grand Duke Gediminas for the discovery of the remains of Zigmantas Sierakauskas and Konstantinas Kalinauskas, the commanders of the 1863-1864 uprising, as well as other participants.