President: decision on Savickas will depend on his competences and elections 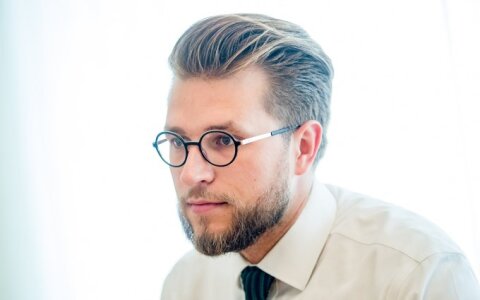 Lithuanian President Gitanas Nauseda says Lukas Savickas' professional competencies and the peripeteia of the period in the run-up to this year's parliamentary election will be what he will consider when deciding if the prime minister's advisor is suitable for the job of economy and innovation minister.

"I believe we will, first of all, look at his professional qualities, experience and managerial competencies, and, of course, the time horizon that we have until the Seimas election," Nauseda told reporters in the eastern town of Visaginas on Friday.

"Taking all this into consideration, we will make decisions about the suitability or non-suitability of the candidate," he added.

The president plans to meet with Savickas, now an advisor to the prime minister, next week.

The post of economy and innovation minister has been vacant since December, when Virginijus Sinkevicius became a European commissioner.

If appointed, Savickas could be sworn in as minister no earlier than in March when the Seimas' spring session begins.

Savickas has been the prime minister's advisor on economic affairs and strategic change management since December 2016. He was last year elected to the City Council of Vilnius on the ticket of the Lithuanian Farmers and Greens Union, but is not a member of the party.

Savickas holds a MA in European Public Affairs from Maastricht University in the Netherlands and a BA in Politics with International Relations from the University of York in the UK.

On his return to Lithuania after his studies, Savickas worked as team leader for regulatory affairs at the government's foreign investment promotion agency Invest Lithuania, project manager with the Kurk Lietuvai (Create Lithuania) program, and head of policy and public affairs at Investors'​ Forum.

President: decision on Savickas will depend on his competences and elections