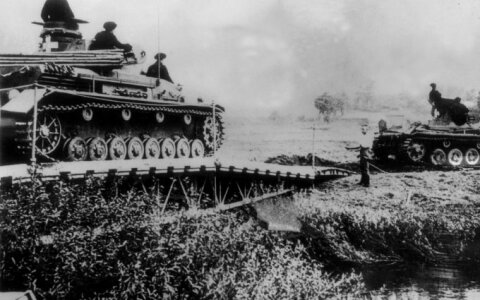 The Lithuanian and Polish foreign ministers have agreed to work together to counter Russia's attempts "to rewrite history".

Russian President Vladimir Putin has said on several occasions recently that Poland is responsible for the outbreak of World War Two.

"We'll certainly not allow history to be falsified so easily, and our strategic communicators are already cooperating and counteracting that lie, which is (...) another attempt to rewrite history, revive the image of Stalin as a positive figure (and) justify the Molotov-Ribbentrop Pact," Lithuanian Foreign Minister Linas told reporters in Vilnius on Thursday,

"We are working closely and efficiently on this. And we'll continue to do so," he added.

Polish Foreign Minister Jacek Czaputowicz warned that Russia and Putin personally might start imposing a "fake version of history" in the run-up to this is year's 75th anniversary of the end of World War Two.

"We agreed that disinformation experts will discuss how we can resist these threats together," he added.

Signed in August 1939, the German-Soviet Non-Aggression Pact, known as the Molotov-Ribbentrop Pact, and secret protocols divided Eastern Europe into German and Soviet spheres of influence.