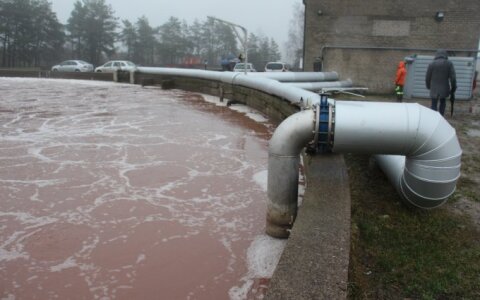 In response to the Curonian Lagoon pollution scandal, Lithuanian President Gitanas Nauseda has decided to donate 4,000 euros to a research institute in Klaipeda, thus symbolically returning the amount of money his election campaign received from Grigeo Group CEO Gintautas Pangonis.

"The president took the decision to transfer an amount of his personal money, equivalent to the election campaign donation by the company's CEO, to Klaipeda University's Marine Research Institute," Antanas Bubnelis, Nauseda's spokesman, told BNS.

The institute says it is ready to help assess the impact of the release of untreated wastewater from Grigeo's cardboard plant in Klaipeda on the Curonian Lagoon and the Baltic Sea coastal area.

Nauseda is firm in his position that any fact of environmental pollution in Lithuania must be given a principled assessment and the authorities must take all measures to ensure that the guilty parties cannot evade responsibility and that any damage done to the environment is compensated for, according to the spokesman.

Pangonis, Grigeo's president and biggest shareholder, donated 4,000 euros to Nauseda's campaign and 1,500 euros to the campaign of Ingrida Simonyte, the presidential candidate of the conservative Homeland Union–Lithuanian Christian Democrats.

In a similar step, the conservative party said it would contribute 8,500 euros, the amount Pangonis donated to Laima Andrikiene's European Parliament election campaign, to a Curonian Lagoon fish-stocking initiative.

Pangonis has admitted that Grigeo Klaipeda released biologically untreated wastewater into the lagoon.