Adviser: all allies will decide on troop withdrawal from Iraq 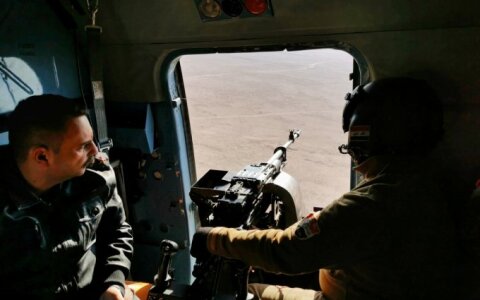 All allies will decide on the withdrawal of troops from Iraq and Lithuania will not take unilateral action, says Jonas Vytautas Zukas, an adviser to Lithuanian President Gitanas Nauseda.

"We are considering it (troop withdrawal – BNS), but we are part of an international mission. So it will depend on what our allies decide. We cannot decide ourselves to leave when other countries continue their mission," the chief presidential advisor on national security told journalists at the parliament on Wednesday.

"Everything will depend on decision made at the top level," he added.

Two bases in Iraq came under fire from Iran last night, in retaliation for the killing by the United States of an influential Iranian general last week.

Zukas hopes the ongoing tensions "will not evolve into some major escalation of military action".

Six Lithuanian troops previously served at one of the bases in Iraq that came under attack from Iran but they were not there during the attack, Lithuania's Ministry of National Defense said on Wednesday after updating information on the situation of Lithuanian troops in Iraq.

Iran also targeted the base in Irbil.

Another nine Lithuanian troops served in another NATO-led mission. Three of them have already been moved to Kuwait, and the rest remain in Baghdad, Andrius Dilda, spokesman for the Defense Staff, told BNS.

Adviser: all allies will decide on troop withdrawal from Iraq