US Senate confirms Gilchrist as new ambassador to Lithuania 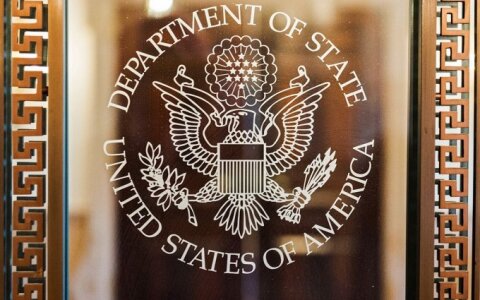 The Senate of the United States has approved the appointment of Robert Gilchrist as the new ambassador to Lithuania.

The diplomat himself announced the news on Twitter on Friday, saying that he hopes to assume his new position soon.

"A truly great honor. After swearing in, I hope to arrive at post in late January," he tweeted.

Gilchrist will replace outgoing Ambassador Anne Hall who has served in the position since 2016.

Lithuanian Minister of Foreign Affairs Linas Linkevicius today congratulated the diplomat and said he's looking forward to meeting with him and "working together in strengthening strategic relations".

Gilchrist previously served as deputy ambassador in Sweden and Estonia, led the Office of Nordic and Baltic Affairs in the Bureau of European and Eurasian Affairs and worked at the US Embassies in Iraq and Romania. He has served as the Director of the Operations Center of the U.S. Department of State since 2016.

The US diplomat speaks Spanish, French, Estonian and Romanian.

Gilchrist is openly gay and took part in the Baltic Pride LGBT parade in Estonia in 2011.

US Senate confirms Gilchrist as new ambassador to Lithuania