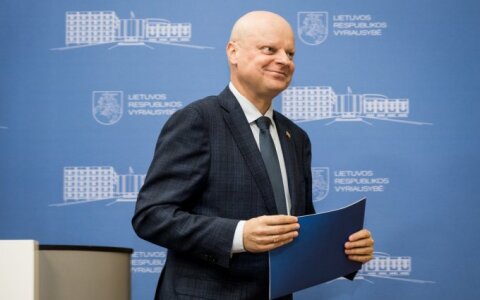 The popularity of Lithuanian Prime Minister Saulius Skvernelis has nosedived by 8 percentage points, a new public survey has revealed.

42.9 percent expressed a favorable opinion about the prime minister during the December survey by Vilmorus for the Lietuvos Rytas daily, down from 50.7 percent a month earlier.

Vladas Gaidys, director of Vilmorus, says the drop might be related to the paving of a street in Vilnius District close to the prime minister's home.

"The drop is almost eight percent and that is clearly related to the road paving," he told BNS.

President Gitanas Nauseda remains the most popular politician in Lithuania, the survey shows, despite his rating going down for a second month in a row. It inched down to 69.3 percent, from 72.8 percent. His popularity rating stood at 82.5 percent in October.

Speaker of the Seimas Viktoras Pranckietis is third with 45.2 percent (47.6 percent in November), followed by European Commissioner Virginijus Sinkevicius with the same result (43.3 percent).

Skvernelis dropped to the fifth place.