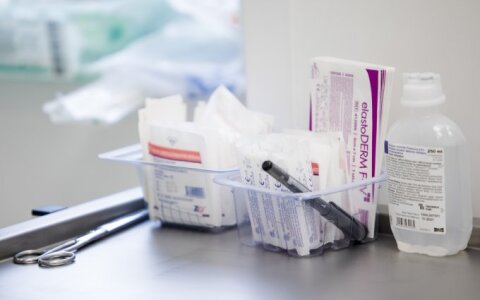 The first blood vessel transplantation was carried out at Kaunas Clinics in Lithuania last week, saving the patient's leg.

"The patient can practically go home today. He underwent surgery on Tuesday and is already walking today and can go home," Linas Velicka, the head of the blood vessel surgery division at the hospital, told journalists on Monday.

The patient has occlusive peripheral arterial disease. Doctors initially could not perform the shunting of his own vessel, and implanted a synthetic vessel. But later an infection developed in the implanted synthetic blood vessel, therefore, a donor vessel was used. That means the implant had to be removed, which in other cases would have led to the loss of a limb.

"There was a 60-70 percent, even 80 percent, risk he would have had to have his leg amputated," Velicka said.

The patient was lucky as doctors managed to restore blood flow after the implantation of a live vessel. The first such procedure in Lithuania became possible after the hospital's tissue bank started collecting donor's vessels.

The first such operation was carried out in the middle of the XX century but was not very successful, therefore, doctors started using synthetic blood vessels.

Around 15-20 patients need such surgery every year.