Chief of SIS: search restrictions for judges would impede fight against corruption 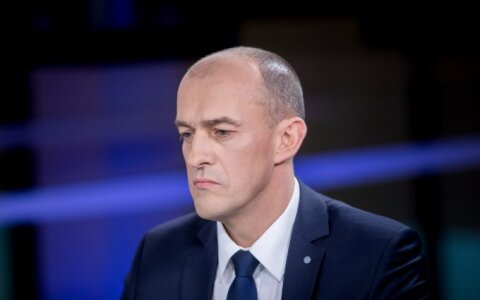 His comments came in response to the ruling by a panel of seven judges, stating that judges can only be subjected to searches upon receipt of approval of the Seimas or president or if a judge is caught committing a crime.

On Monday, the Supreme Court ruled that a person's search or a search "in fact means the restriction of such a person's freedom". The Constitution bans restricting a judge's freedom without the consent of the Seimas, or the president in between parliamentary sessions.

Although the Supreme Court issued its opinion on judges only, some lawyers say this precedent could also be applied to members of the Seimas.

Bartkus told BNS on Tuesday that "after this ruling there will be situations in practice during top-level corruption investigations when law enforcement institutions simply won’t be able to carry out the necessary procedural action, a search, just because of the set impracticable legal procedure".

"Therefore, this decision will negatively affect the fight against corruption," the SIS head said.

His position is echoed by the prosecution service as well, with prosecutor Gintaras Jasaitis of the Prosecutor General's Office stating in its complaint with the Supreme Court that the requirement to receive the Seimas or president's permission to carry out a search "would grant a judge absolute immunity".

In its long-awaited ruling, the Supreme Court stated that two years ago Vilnius Regional Court "justly deemed the searches judge Ramunas Antanavicius was subjected to unlawful and information collected during them as not meeting (…) the requirements set for evidence".

The Supreme Court underlined that immunity is necessary to ensure the independence of courts and judges and protect them from the influence of other government institutions and officials.

(…) during a pre trial investigation when a procedural coercive measure – a search and a person's needs to be applied, permission of a competent institution is necessary (excluding cases when a judge is caught committing a criminal act), since the performance of a search or a person's search restricts the freedom of the person subjected to such actions," the court ruling reads.

Antanavicius, a judge of Kaunas Regional Court, was accused of giving a 600 euro bribe to Mindaugas Klemenis, a judge at the district court of Mazeikiai District, for the latter to reduce a driver's license's revocation period.

The ruling should not affect the ongoing high-profile judicial corruption case as eight judges in this case were subjected to searches upon the then President Dalia Grybauskaite's permission.

But some lawyers might try to cite the ruling in the ongoing political corruption case when the then MPs Eligijus Masiulis and Vytautas Gapsys were subjected to searches without their immunity lifted.

The constitutional provisions on restricting the freedom of lawmakers and judges are very similar.

"I believe the provisions of the Constitution, the Statute of the Seimas and the Law on Courts on the immunity of Seimas members and judges should be interpreted and applied equally," Saulius Juzukunos, the lawyer representing Gapsys, told BNS.

Aurelijus Gutauskas, chairman of Criminal Division of the Supreme Court, said in a comment to BNS that the precedent formulated in this case applies only to a judge's "other freedom restriction".

"Restriction aspects of any other persons, including other subjects with a constitutional status, were not considered in this case and an opinion on them was not expressed," Gutauskas said.

He said the law states that "courts are only bound by the rules of legal interpretation, formulated in analogue or in essence similar cases".

Chief of SIS: search restrictions for judges would impede fight against corruption