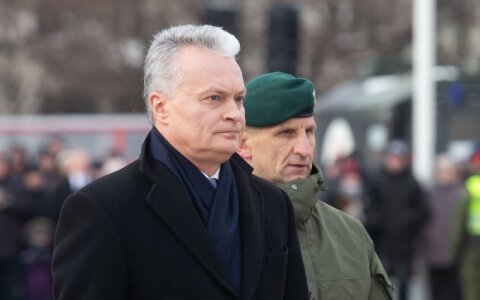 It showed that 72.8 percent of people had a favorable opinion about the president in November, compared to 82.5 percent in October. And the share of those with a negative opinion about Nauseda went up from 3.3 percent to 8.7 percent.

Political scientist Kestutis Girnius says Nauseda's previous rating exceeding 80 percent was not normal and was more to do with the post-election „euphoria“.

"It always happens so that after an election, people are ready to have the best possible opinion about that person," the associate processor at the Institute of International Relations and Political Science at Vilnius University told BNS Lithuania.

And the president is forced to make decisions that are not liked by everyone, he added.

Girnius believes the presidential rating could have been affected by disagreements with the government over taxes, his calls to increase defense spending and also his vetoes of certain laws adopted by the parliament.

"People see that it's not a person who will resolve everything," the political scientist said.

Vilmorus director Vladas Gaidys told BNS Lithuania that the presidential rating could have been affected by his decision to visit his daughter in Korea when firefighters were battling a major fire at a tire recycling enterprise in Lithuania's southern city of Alytus.