Duda in Vilnius: Central European nations' unity is necessary foundation of their freedom 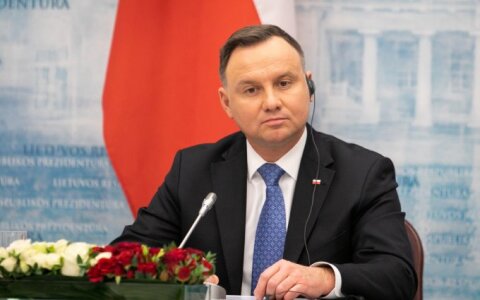 The unity of Central European nations is a necessary foundation of their freedom, Polish President Andrzej Duda said at Friday's ceremony of reburial of the remains of the commanders and participants of the 1863-1864 uprising against Tsarist rule.

"Today we, present-day people, are here to celebrate the heroism and sacrifice of our predecessors. But we are also here, first and foremost, to demonstrate that we, just like them 156 years ago, are united in our shared memory, values and aspirations," the Polish president said in Vilnius' Cathedral Square.

According to Duda, Central European nations are bound together by their shared experiences and values, present-day partnership, aspirations and a common future.

"For it to be good and prosperous, we must rely on the principles of solidarity, friendship and mutual assistance, because the unity of the peoples of Central Europe is a necessary and reliable and strongest foundation and guarantee of freedom, sovereignty and independence of our countries," he said.

"Just like the participants of the uprising 150 years ago were people of solidarity, we, present-day people, want to act together, in solidarity."

Vilnius is hosting on Friday a state funeral ceremony for two commanders – Zygmunt Sierakowski (known in Lithuania as Zigmantas Sierakauskas) and Konstanty Kalinowski (Konstantinas Kalinauskas) – and other participants of the 1863-1864 uprising in the former Polish-Lithuanian Commonwealth.

The commanders were executed in the Lithuanian capital's Lukiskes Square in 1864. Their remains, along with those of 18 other insurgents, were unearthed during Gediminas Hill reinforcement works in 2017.

Duda in Vilnius: Central European nations' unity is necessary foundation of their freedom