Lithuania and Poland complete arrangements for state reburial of 1863 insurgents 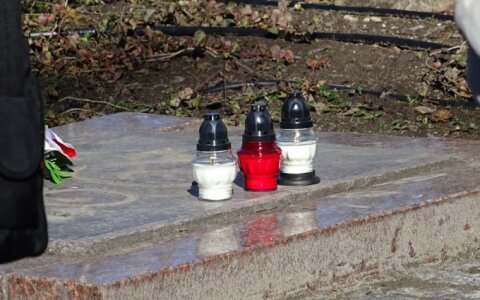 Representatives of the Lithuanian and Polish government completed earlier this week the last arrangements for the state reburial ceremony on Nov 22 in Vilnius to rebury the remains of participants of the 1863-1864 uprising against Tsarist Russia.

The ceremony will be attended by the Lithuanian and Polish presidents, and the coffins with the remains of the uprising's leaders Zigmantas Sierakauskas (Zygmunt Sierakowski in Polish) and Konstantinas Kalinauskas (Konstanty Kalinowski), as well as those of another 18 participants, will be taken from Vilnius Cathedral to the old Rasos Cemetery, with an intermediate stop at the Gate of Dawn.

"We have completed the last arrangements on the smallest technical and protocol details," the Lithuanian government's Vice Chancellor Deividas Matulionis told BNS Lithuania on Friday.

The ceremony will start in the morning on Nov 22 at the Palace of the Grand Dukes of Lithuania.

The farewell ceremony will continue at Vilnius Cathedral where a service will be held at noon, with the participation of Lithuanian, Polish and Belarusian bishops.

The funeral procession will start after the church service, with an intermediate stop at the Gate of Dawn where the bells of the surrounding churches will toll and prayers will be said in the Lithuanian, Polish and Belarusian languages. The deceased will be honored by Lithuanian and Polish Honorary Guard troops.

The procession is scheduled to reach the cemetery at around 3 p.m. and Lithuanian President Gitanas Nauseda and Polish President Andrzej Duda will deliver their speeches.

Members of the public will be able to watch the ceremony on big screens in Cathedral Square, and it will also be broadcast by Lithuanian and Polish television.

Lithuanian diplomats hope Belarus will inform them next week who will represent the country at the ceremony. Representatives of Latvia and Ukraine will also attend the ceremony.

The Lithuanian-Polish uprising against the Russian Empire took place in 1863-1864. Its leaders were executed in 1864. Their remains were found inside Gediminas Hill in central Vilnius in 2017.

Lithuania and Poland complete arrangements for state reburial of 1863 insurgents