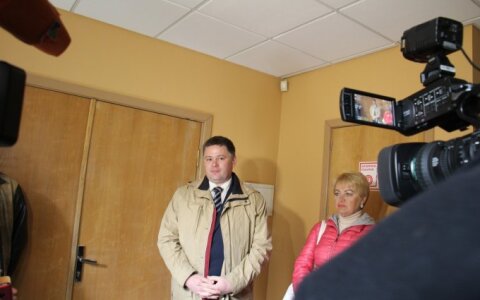 Viaceslav Titov, a Klaipeda councilor convicted of defaming Adolfas Ramanauskas-Vanagas, one of the leaders of Lithuania's anti-Soviet partisan resistance, has lost his mandate.

The seat now goes to Ela Andrejeva, the next-in-line candidate of the Titov-led public election committee.

Under the Law on Elections to Municipal Councils, a municipal councilor loses his or her mandate once a court judgment convicting him or her comes into force.

In May, the Klaipeda District Court found Titov guilty of the defamation of the memory of a deceased person, incitement to hatred, and public approval or denial of Soviet crimes, and fined him 12,000 euros.

In mid-October, the Klaipeda Regional Court reduced the fine imposed to 10,000 euros. The judgment took effect on October 17.

The investigation was launched in July 2018 after the Klaipeda politician said in a public discussion that 8,000 people, including children, were killed at Ramanauskas-Vanagas' initiative during the anti-Soviet guerilla war and that the partisan commander personally pronounced the death sentences.

Titov claimed he based his statements about Ramanauskas-Vanagas on a Soviet court ruling. Historians say, however, that any research of the anti-Soviet resistance in Lithuania cannot be based on Soviet information only as KGB files are full of false information aimed at smearing partisans.

The Lithuanian Supreme Administrative Court ruled last year that Titov had breached his oath as a councilor by making such statements.

The judgment opened the way for impeaching Titov. The councilor resigned before an impeachment vote, but was reelected in the March 2019 municipal elections.