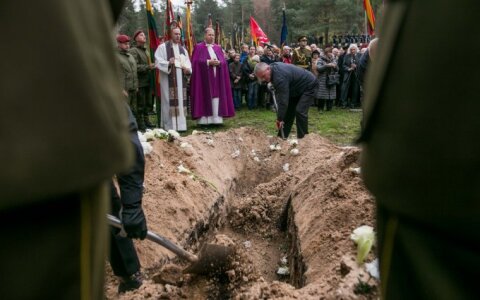 The remains of Antanas Kraujelis-Siaubunas, Lithuania's last partisan who died with a gun in his arms, fighting against the Soviets, were buried at Antakalnis Cemetery in Vilnius on Saturday.

"I bid farewell to him with a thought of joy just because we found him and now he has his place, and we know where to go and lit a candle and pray. It’s wonderful, it's a celebration," Kraujelis-Siaubunas's sister Janina Syvokiene told journalists after the ceremony.

Lithuania's Chief of Defense Major General Valdemaras Rupsys said during the ceremony that Kraujelis's fighting path is an example of strong will, a noble soul and unconditional love for one's homeland.

"Despite attempts by the butchers to erase Kraujelis' life from the nation's memory, humiliate him and degrade him, they did not succeed. Belief and love are stronger than fear and hate on which the Soviet occupation regime was built on," Rupsys said.

Kraujelis-Siaubunas' remains were found in June and the identity was confirmed through genetic tests.

Archeologists had been looking for his remains for several decades.