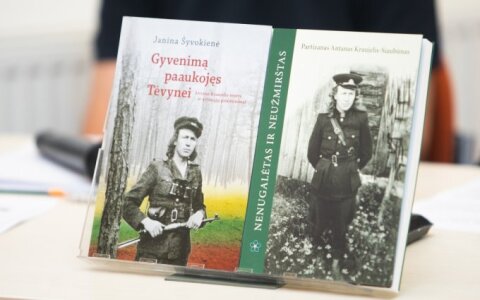 The remains of Antanas Kraujelis-Siaubunas, Lithuania's last partisan who died with a gun in his arms, will be buried in the area of Antakalnis Cemetery where other military officers are buried, Vilnius Municipality said.

The decision was made by a temporary commission set up to deal with issues related to the reburial of the remains of participants of the resistance movement and other persons killed during the occupation, as well as the commemoration of their burial places.

"Having received the Ministry of National Defense' request for the reburial at Antakalnis Cemetery, the commission made such a decision," Vilnius Vice Mayor Vytautas Mitalas, who chairs the commission, told BNS Lithuania.

The municipality also said the partisan would be reburied on Oct 26.

Kraujelis-Siaubunas' remains were found in June and the identity was confirmed through genetic tests.

Archeologists had been looking for his remains for several decades.