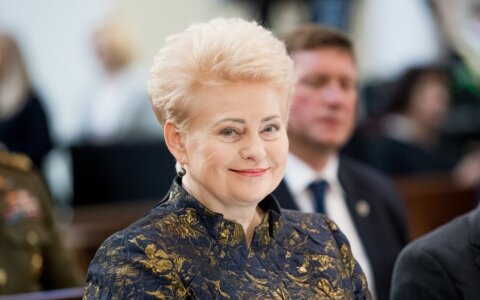 Lithuania's former President Dalia Grybauskaite describes the Farmers and Greens Union's pressure on Viktoras Pranckietis to step down as the speaker of the Seimas as "a fiesta of political petty-mindedness".

"Looking from outside, one can see elements of revenge for (a lack of) political loyalty," Grybauskaite said in an interview aired by Lithuanian Radio on Wednesday.

"There are not and will not be any concrete accusations against him; he is a decent person. Looking from outside, we see a fiesta of political petty-mindedness going on in the Seimas," she added.

According to the former president, Pranckietis has to decide for himself "how involved to be in that political petty-mindedness".

Since July when the Farmers and Greens signed a new coalition agreement, Karbauskis has repeatedly called on Viktoras Pranckietis to step down as the speaker of the Seimas so that the Social Democratic Labor Party's candidate could take up the post.

However, Pranckietis, who left the Farmers and Greens' Union last month, says he will not resign unless the parliament votes to remove him from the post.

The Farmers and Greens have said they will bring a no-confidence motion but have not done so so far.