Lithuania may increase contribution in Mali and Afghanistan 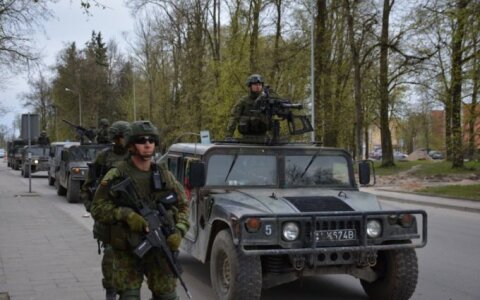 The Defense Ministry will propose to somewhat increase Lithuania's military contribution to missions in Mali and Afghanistan and to send troops to the Strait of Hormuz to help protect shipping in the Persian Gulf.

The ministry is submitting a draft parliamentary resolution on Lithuanian military units' participation in multinational operations to the Seimas for approval.

The parliament is expected to pass the resolution by January because the current mandate will expire at the end of 2019.

"This is a tactical increase where we may be lacking (in numbers)," Defense Minister Raimundas Karoblis told reporters on Friday.

"Our proposal is regarding Afghanistan where the threshold has basically been reached already. For certain periods, additional personnel with specific functions are needed there," he said.

According to Karoblis, an additional number of troops in Mali is needed because members of the National Defense Volunteer Force carrying out force protection tasks in the German contingent's camp in Gao will rotate every six months instead of four months.

"We may need certain some reinforcement," the minister said.

Currently, around 40 Lithuanians are deployed to the UN-led stability operation MINUSMA in Mali.

According to Karoblis, the ministry will most probably ask to raise the threshold numbers both in MINUSMA and in Afghanistan by ten.

The minister said that the draft resolution will also provide for sending Lithuanian troops to the Strait of Hormuz, a proposal already endorsed by the State Defense Council chaired by President Gitanas Nauseda.

"It would probably be a relatively small force. We are considering (sending) staff officers," the minister said.

The Strait of Hormuz is a key waterway to the open ocean from oil-rich Gulf countries.

Lithuania may increase contribution in Mali and Afghanistan