Around 200 people take part in climate change march in Vilnius 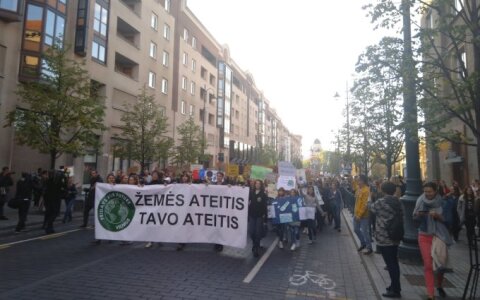 Around 200 activists, mostly young people, gathered in Vilnius on Friday to demand action on climate change.

Protesters marched to the sound of drums and chants from the Seimas building along Gedimino Avenue to the government building.

"We want the political will that would ensure a safe future for us," said Saule Andrejevaite, an organizer.

Participants of the demonstration called on politicians and businesses to reduce greenhouse gas emissions and to base their decisions on the latest scientific research.

The march in Vilnius was part of worldwide protests against climate change.

About 200 protests took part in a similar demonstration in the Lithuanian capital a week ago.

The global movement against climate change, Fridays for Future, was inspired by Greta Thunberg, a teenager from Sweden.

The Lithuanian government decided this year to join an initiative by other European countries to set a goal to transition to a climate-neutral economy by 2050.

To achieve these goals, plans call for investing more in alternatives to fossil fuels and carbon capture and storage technologies as well as for encouraging consumers to change their habits.

Around 200 people take part in climate change march in Vilnius