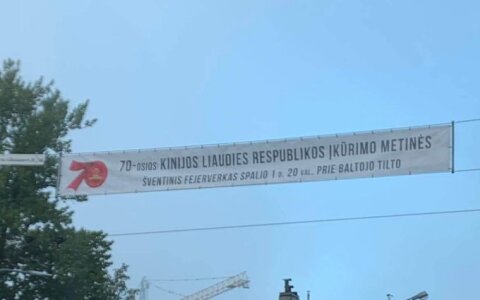 Vilnius Mayor Remigijus Simasius says an unsanctioned celebration of the 70th anniversary of the People's Republic of China will not take place in the Lithuanian capital.

"The event was not coordinated with anyone; a request for it has just been received," Simasius said on Facebook late on Monday afternoon.

"The ads will be taken down today; the event will not take place," he added.

The ad campaign invited the public to watch a festive firework display near the White Bridge in the capital's center on October 1 to celebrate the communist China's 70th anniversary.

"Such games won't work in our city, and it doesn't matter who is behind this -- whether it is the world's largest state or an Indian Ocean island with a population of just people. The rules are the same for everyone," the mayor said.

Municipal administration officials told BNS earlier in the day that several posters advertising the celebration would be removed because nobody had asked for permission from the municipality's foreign and public affairs divisions to organize the event.

Adomas Buzinskas, Vilnius Municipality's deputy administration director, told BNS that if a request for permission to hold such an event were filed, it would be considered under the usual procedure.

The staff of the Chinese embassy to Lithuania told BNS on Monday that they would look into the situation and answer questions.

"I was shocked, because, basically, we are celebrating the establishment of a communist state whose totalitarian regime has claimed a great number of victims," Andrius Navickas, one of the MPs, told BNS.

He said it would be similar to celebrating 100 years since the establishment of the Soviet Union.