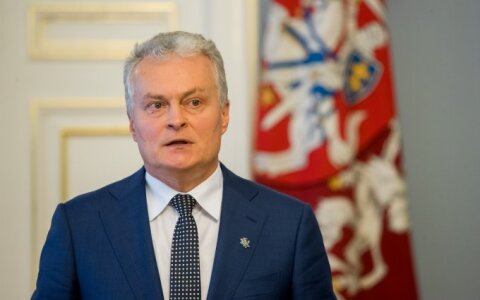 "These days, we need the example of Jew rescuers more than ever before. Hate is raising its ugly head again, fed by cynical attempts to gain political dividends in discussions," Nauseda said during his first state awards ceremony as the president of Lithuania.

"Attempts are being made to intimidate our fellow citizens -- we cannot tolerate that," he added.

All in all, 38 people were awarded, most of them posthumously. Their awards were presented to their family members.

Only two of the four living awardees were present at the ceremony. The other two were unable to attend due to poor health.

"Although many of the people we honor have already departed this world, their deeds continue to light the way both for us and for future generations," Nauseda said in his speech.

The president honored Jewish rescuers on the occasion of the Day of Remembrance for Jewish Victims of Genocide in Lithuania, which will be marked on September 23 to commemorate the liquidation of the Vilnius ghetto on that day in 1943.

The Nazis and their local collaborators killed over 90 percent of Lithuania's pre-war Jewish population of around 200,000 during the Holocaust.

The president noted that while "their fellow citizens' choices" were among the factors that led to the destruction of the Jewish community in Lithuania, Lithuanians contributed in large numbers to the rescue of Jews as well.

"It (the Jewish community) suffered because of their fellow citizens' choices, too. We must acknowledge and accept that," the president said.

"However, Lithuanians were probably the most actively involved in the rescue of Jews among Eastern European nations, thus revealing the true values ​​of our society," he added.

Life Saving Crosses are awarded to individuals who risked their lives and the lives of their families to rescue other people.