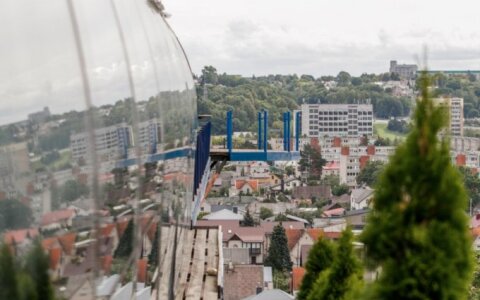 Kicking off later in September, this year’s edition is asking: “Landmark architecture – creating or destroying the city’s identity?”.

The Kaunas Architecture Festival (KAFe) is only held once in three years, which makes it one of the most awaited events this Autumn. It’s not enough to call it ‘event’, though, as the festival will go on for two months and includes various workshops, exhibitions, walks, talks, books presentations and an international forum, writes visit.kaunas.lt.

Kicking off later in September, this year’s edition is asking: “Landmark architecture – creating or destroying the city’s identity?”. For two months, we will look at what landmark is – the symbol of the city, landmark building – and what examples of it we have in Kaunas. KAFe is only interested in the most prominent symbols of the city. Anti-landmarks, post-landmarks and other ways of marking the city are of interest in the context of KAFe.

It couldn’t be more symbolic – the KAFe opening will take place in one of such anti-landmarks, the unfinished Hotel Britanika which will hopefully soon be demolished and will take the longest Lithuanian word to the oblivion with it (the author of Nebeprisikiškiakopūsteliaujantiesiems is Morfai).

On September 21, we will have perhaps the only (for many of us) opportunity to climb up Britanika – a thirty-year-old semi-invisible ghost – and look at our Kaunas from up high. We hope that this big picture will become an exciting launch of a very busy Autumn.

Later this month, everyone’s invited to take part in the first-ever the first-ever interactive heritage hackathon in Lithuania. Together with its partners at Kaunas University of Technology and Kaunas 2022, KAFe is urging you to give it a go if you come from the fields of architecture, art, heritage – or any other areas, really, if you love Kaunas and its heritage very much. Digitizing, alternative mapping, creating digital platforms and transforming objects of architecture are just a few paths we’ll take over the last weekend of September in the KTU student campus.

Even more architectural action will take place in Kaunas later this Autumn. On October 4, an exhibition called “Architect’s Herbarium” will open in Kaunas Artists’ House. Architect Aistė Ambrazevičiūtė says “My work is balancing between architecture, sculpture, digital art, biology and technology. Particularly inspiring I find nature’s diversity in material, form and different scales. Therefore, I am constantly searching interrelations between nature-based elements, where it is important not only the imitation of visual forms but also its hidden wisdom”.

“Architect’s Herbarium” will be followed by “Architect Erik Bryggman (1891-1955): Nordic classicism, functionalism and new empiricism”, opening on October 31. The exhibition presents the career of architect Erik Bryggman (1891-1955), one of the most influential architects of Nordic classicism, functionalism and new empiricism. Bryggman introduced Functionalism in Finland together with Alvar Aalto, making it the nationally accepted style of architecture. The exhibition is based on Mikko Laaksonen’s book “Architect Erik Bryggman: Works”. We interviewed Mikko Laaksonen last year when he was visiting Kaunas (the story is available here), and we can’t wait to meet him in person! This exhibition will also take place in the Kaunas Artists’ House.

Two more exhibitions be opened in the Old Town on October 14. Visit the Architects’ House and the Kaunas Photography Gallery to get introduced to some of the most exciting architecture student graduation projects from all over the place.

Another fascinating part of KAFe’s program this year is “(Invisible) Architecture project”, a project researching the perception of architecture by those who do not see. Excursions and workshops based on the design thinking method have already taken place, and the results of these workshops will be presented on November 26 during an exhibition and a lecture in the Kaunas Artists’ House.

The Forum which we mentioned in the intro will take place will take place on November 28-29 in Žalgirio arena. Prominent architects and researchers from Lithuania and the world will share their insights and experience in the Forum.

For example, Ole Gustavsen, one of the founding architects of the Norwegian Office of Architecture, will talk about the experience in designing the famous Oslo Opera House. Also invited are the renowned Portuguese architect Manuel Aires Mateus, Jose Selgas from Spain (SelgasCano, a finalist for Mies van der Rohe in 2019, the architect of Placencia Cultural Center in Spain), Arno Brandlhuber (finalist for Mies van der Rohe in 2019, TerrassenHaus architect, Co-author of the 2016 German Pavilion at the Venice Architecture Biennale), David Crowley (Art Historian, Ireland, National College of Art and Design) and others. It is scheduled that participating architects will exhibit one piece of their work that most closely matches the theme of the Forum. The final program of the Forum will be announced in November.