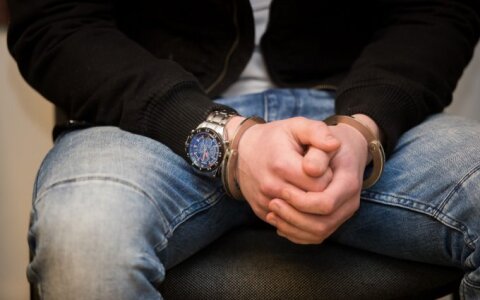 A Vilnius court on Friday started hearing a case of several oreigners who produced drugs in Latvia and sold them in Lithuania.

Latvian Mikhail Brizhinsky and Russian citizens Nikolay Tumashkevich, Aleksandr Tumashkevich and Diana Martsinkevich are charged with the possession of a large quantity of drugs and their smuggling.

The three Russian citizens are currently in custody and were brought into the courtroom by a convoy. The Latvian citizen is currently free.

The men are all brothers but the Latvian took the name of his wife.

Prosecutor Tomas Uldukis told the court Brizhinsky and Nikolay Tumashkevich formed a criminal group and later got the other two persons involved. They would produce drugs, a mixture of carfentanil, in Latvia and would then smuggle it to Lithuania.

Large quantities of drugs were found hidden in several places in Vilnius County.

Three of the court defendants pleaded guilty in court and Aleksandr Tumashkevich pleaded not guilty.

The investigation in this case was launched in August, 2018 upon receipt of information that foreign citizens of Roma nationality were selling drugs in the Lithuanian capital.