Skvernelis: we'll have national stadium in Kaunas, not Vilnius 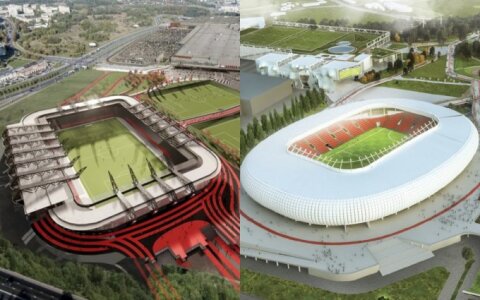 Lithuania's national stadium will be built in the country's second-largest city of Kaunas, not in the capital Vilnius, Prime Minister Saulius Skvernelis believes. In his words, if the government, not the Vilnius authorities, had implemented the project, the stadium would have been built already.

Vilnius Mayor Remigijus Simasius says, however, that if the government met its commitments, the stadium would be already standing in Vilnius.

"We cannot do the job for the municipality. Yes, you have constant pressure on them, and constant attention, and the provision of assistance. We have not managed to bring this project under control since 2015. It's very very sad and regrettable, not to say that European funds will not be used," the prime minister told journalists on Wednesday.

"In any case, we will have a national stadium not in the capital, but in Kaunas. That’s a fact. And regarding the stadium in the capital, everything is in the hands of the municipality," Skvernelis added.

Meanwhile, Simasius says the biggest threat to the national stadium project comes from the government.

"If the government does not do that or wants to do it "backhanded", that's the biggest threat. And regarding the comment that if the government had done it, it would have been standing already, I just want to remind you that based on all documents we have signed, the government is the one implementing the project but that implementation is such that the prime minister doesn't even know about it," Simasius told BNS Lithuania.

He also said if the government had not decided to withdraw European funding, "the contract would have signed already and the work would have been started".

Povilas Poderskis, director of administration at Vilnius Municipality, said on Wednesday the municipality hopes to sign a contract for the construction of the national stadium with the tender's winner Axis Industries, part of the Icor group, in November, and until then the municipality will be looking for new funding sources.

Attempts to build an international-standard stadium in the capital's Seskine neighborhood have been made since 1987. Its construction was last started in 2008 but had to be halted as funding was stopped.

Skvernelis: we'll have national stadium in Kaunas, not Vilnius